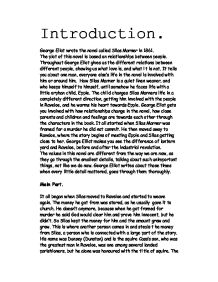 Introduction. George Eliot wrote the novel called Silas Marner in 1861. The plot of this novel is based on relationships between people. Throughout George Eliot gives us the different relations between different people, showing us what love is, and what it is not. It tells you about one man, everyone else's life in the novel is involved with him or around him. How Silas Marner is a quiet linen weaver, and who keeps himself to himself, until somehow he faces life with a little orphan child, Eppie. The child changes Silas Marners life in a completely different direction, getting him involved with the people in Raveloe, and he warms his heart towards Eppie. George Eliot gets you involved with how relationships change in the novel, how close parents and children and feelings are towards each other through the characters in the book. It all started when Silas Marner was framed for a murder he did not commit. He then moved away to Raveloe, where the story begins of meeting Eppie and Silas getting close to her. George Elliot makes you see the difference of lantern yard and Raveloe, before and after the industrial revolution. The values in this novel are different from the way we are now, as they go through the smallest details, talking about such unimportant things, not like we do now. ...read more.

She drank a demon drink called opium where she sank down onto a bush as the drink killed her. She lay right next to Silas Marner's house, so little Eppie toddled to the open door of his house and squatted down on a sack next to the warm hearth. Silas Marner was in the cottage, and had left his door open as he contracted the habit of opening the door and looking out from time to time as though he thought his money might come back to him somehow. He turned towards the hearth and that's when he thought his gold had been bought back to him. He had mistaken it for Eppie's hair and soon realized that it wasn't his gold, but a little sleeping child. He then discovered the mum of the child and set off to the red house where everyone from the village was for New Year. Silas told the people about the child and the mother and Godfrey instantly knew the child was his and that his drunken wife was dead. A women tried to take Eppie from him but Silas didn't want to let her go, as I think its an impulse to keep the child after losing all his money, his obsession with that money is turning his attention to Eppie. ...read more.

a "better life," "I can't feel as I've got any father but one," Which tells us that Eppie loves Silas and cares for him as much as he does for her. Two other parent and child relationships such as Godfrey and Eppie's were non-existent. Godfrey did not care for Eppie and did not want her, but left her to starve and become ill at his wife's home, Molly Farren. Even when he had a chance to claim her at New Years Eve when Molly Farren died that night, he did not want Eppie, nothing to do with her. As Godfrey says; "As for the child, he would see that it was cared for: he would never forsake it; he would do everything but own it." In other words, his love for a woman is much stronger than his own child, that he does not want her. Compared with Silas and Eppie, their love is strong next to Godfrey and Eppie, so it's completely different. Silas cares for Eppie with all his heart, but Godfrey doesn't care about her, Silas would do everything for Eppie as their love blossoms between each other. In my opinion I do agree that children bring hope and forward-looking thoughts to the characters in the novel. It shows you what true love is between people and relationships, and also when there is selfishness. ...read more.