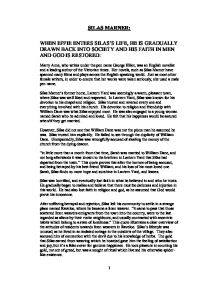 SILAS MARNER: WHEN EPPIE ENTERS SILAS'S LIFE, HE IS GRADUALLY DRAWN BACK INTO SOCIETY AND HIS FAITH IN MEN AND GOD IS RESTORED: Marry Anne, who writes under the pen name George Elliot, was an English novelist and a leading author of the Victorian times. Her novels, such as Silas Marner have spanned many films and plays across the English-speaking world. Just as most other female writers, in order to ensure that her works were taken seriously, she used a male pen name. Silas Marner's former home, Lantern Yard was seemingly a warm, pleasant town, where Silas was well liked and respected. In Lantern Yard, Silas was known for his devotion to his chapel and religion. Silas trusted and revered every one and everything involved with his church. His devotion to religion and friendship with William Dane was what Silas enjoyed most. He was also engaged to a young woman named Sarah who he admired and loved. He felt that his happiness would be assured when/if they get married. However, Silas did not see that William Dane was not the pious man he assumed he was. Silas trusted him explicitly. He failed to see through the duplicity of William Dane. Unexpectedly, Silas was wrongfully accused of stealing the money of the church from the dying deacon. "in little more than a month from that time, Sarah was married to William Dane, and not long afterwards it was known to the brethren in Lantern Yard that Silas had departed from the town." ...read more.

Due to his stolen gold, when Silas entered his cottage he assumed that his gold had returned to him, but to his amazement, it was actually the golden hair of a sleeping child. He marvelled at the sight of the littler girl, as he thought she looked like his sister, and eventually loved the sight of her. This was seemingly the first time Silas had admired part of life since his departure from Lantern Yard. Silas also admired the little girl as she looked like his sister, and soon decided to name her Hephzipher, Eppie for short. "The money's gone I don't know where, and this has come from I don't know where." This quote is Silas's explanation of the arrival of Eppie to the caring Dolly Winthrop. (The only person Silas socialised with in Raveloe.). Symbolically, Silas had lost his material gold to theft only to have it replaced by the golden haired Eppie. And Silas's tenderness for the girl was genuine. The entrance of this little girl into his life had slightly manipulated him. Silas formed an attachment to Eppie and decided to keep her as his daughter. (To adopt her) Throughout the period in the presence of the beautiful young girl's childhood, Silas's love for Eppie was reciprocated. For the first time in his life, Silas began to feel love, warmth and happiness. ...read more.

Silas saw himself as a father to Eppie, and she saw herself as his daughter. "Your father was a lone man till you was sent to him." These were Silas's words to Eppie, informing her of how he had been in a state of loneliness before she has come into his life. Silas had been alone for fifteen years, he lived an isolated life, and lacked companionship with people. He lost faith in God, and failed to trust anybody. "If you hadn't been sent to me, I would have gone to the grave in my misery." These were Silas's words informing Eppie on the impact that she made on his life, and how she had restored happiness and life into him. Just as Silas had formed an attachment to Eppie when she was young, she also reflected upon that when she grew older. Eppie did not care to be a lady, she claimed that she wanted to remain and live with Silas, and marry a working man, Aaron Winthrop (Dolly's son). She also wanted Silas to be at her side always, even when she gets married. We can conclude that Eppie's entrance into Silas's life gradually drew him back into society as many things which he had lacked after his departure from Lantern Yard, such as faith in religion and God, and trust and companionship with people, were soon restored through Eppie's love and Silas's experiences with her. Eppie replaces the weaver's obsession with gold and brings Silas back to a socially active life. ?? ?? ?? ?? 1 ...read more.