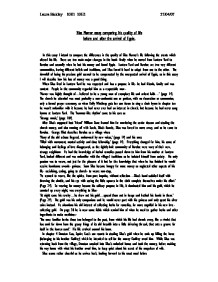 Silas Marner - Comparing his quality of lifebefore and after the arrival of Eppie.

Silas Marner essay comparing his quality of life before and after the arrival of Eppie. In this essay I intend to compare the differences in the quality of Silas Marner's life following the events which altered his life. There are two main major changes in the book- firstly when he moved from Lantern Yard to Raveloe and secondly when he lost his money and found Eppie. Lantern Yard and Raveloe are two very different communities, having different beliefs and traditions, and Silas found it hard to adapt from one to the other. The downfall of losing his precious gold seemed to be compensated by the unexpected arrival of Eppie, so in this essay I will describe how his loss of money was a good thing. When Silas lived in Lantern Yard he was respected and has a purpose in life- he had friends, family and was content. People in the community regarded him as a respectable man- 'Marner was highly thought of...believed to be a young man of exemplary life and ardent faith...' (page 14). The church he attended was most probably a non-conformist one or puritan, with no decoration or communion, only a formal prayer ceremony, so when Dolly Winthrop gets her son Aaron to sing a choir hymn in chapter ten he wasn't unfamiliar with it because he had never ever had an interest in church, but because he had never sang hymns at Lantern Yard. The 'hammer-like rhythm' came to his ears as 'Strange music,' (page 104). After Silas's supposed best 'friend' William Dane framed him for murdering the senior deacon and stealing the church money, and also running off with Sarah, Silas's fianc�e, Silas was forced to move away, and so he came to Raveloe. ...read more.

of sand was blocked up, and it wandered confusedly against dark obstruction.'- George Eliot tries to illustrate how lost Silas feels in his mismal, lonely state, his empty life, lost of the one thing that kept him going- his gold. When the baby turns up at Silas's house he immediately warms to it, and treats it as if it were his own. At first sight he sees not a child before him on the fireplace but his gold returned to him- 'It seemed as if there were gold on the floor in front of the hearth. Gold!-his own gold...instead of the hard coin with the familiar resisting outline, his fingers encountered soft warm curls...it was a sleeping child-a round, fair thing, with soft yellow rings all over its head.' (page 135). As soon as he has overcome his initial shock he hurries about to see to the child- making porridge, comforting the child, warming it up, taking off its boots- 'He had plenty to do through the next hour,' (page 136) so you realise that beneath his stone-cold exterior is a warm heart capable of loving something other than gold. He finds the child's mother dead in a bush outside his house so seeks help from a doctor at the new years eve party at the Red House, and this is when Godfrey realises the child in Marner's arms is his own, but knows he cannot admit it as it would reveal the secret of his wife. A few days later the local people are deciding what to do with the baby, whether or not to take it to the orphanage. They know that this would mean it would have a poor quality of life and see no harm in letting Silas Marner bring the child up. ...read more.

(page 172) Silas seems to have adjusted to his new, normal and happy life with Eppie, but knows he might have to give it up soon, when she considers marriage. He tells her that he would be lonely if she left him though she assures him that she would never leave him, and that Aaron was happy to leave with Marner too, so he says that after talking to Aaron's mother he would not stand in the way to Eppie marrying. Their life is enhanced by the addition of pets- cats, dogs and a donkey, 'The presence of this happy animal life was not the only change which had come over this interior of the stone cottage.' (page170) and often Eppie plays with her pets at the table- 'Eppie's play with Snap and the cat, by which her own dining was made rather a lengthy business.' (page 171). The quality of Silas Marner's life had its ups and downs and a link can be established between when he was happy and when he was in touch with God. Eppie's unpredicted appearance changed Silas for the better and enhanced his life, making him as happy as he was at Lantern Yard. At the end of the book he fears losing Eppie to Aaron but knows he won't be around forever to look after her and loves her too much to stand in the way of her marriage to him and hopes he will still see her if she does decide to marry him. By the end of the story it is clear that the love Silas felt for Eppie is far more strong than anything he felt from the gold, therefore Dunstan stealing his money was definitely a good thing. ?? ?? ?? ?? Laura Bickley 10E1 10H1 27/04/07 ...read more.