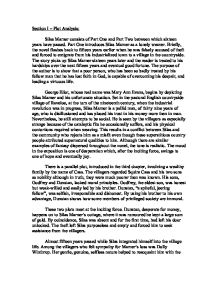 Silas Marner consists of Part One and Part Two between which sixteen years have passed.

Section I - Plot Analysis: Silas Marner consists of Part One and Part Two between which sixteen years have passed. Part One introduces Silas Marner as a lonely weaver. Briefly, the novel flashes back to fifteen years earlier when he was falsely accused of theft and forced to emigrate from his industrialized town to a village in the countryside. The story picks up Silas Marner sixteen years later and the reader is treated to his hardships over the next fifteen years and eventual good fortune. The purpose of the author is to show that a poor person, who has been so badly treated by his fellow man that he has lost faith in God, is capable of overcoming his despair, and leading a virtuous life. George Eliot, whose real name was Mary Ann Evans, begins by depicting Silas Marner and his unfortunate situation. Set in the pastoral English countryside village of Raveloe, at the turn of the nineteenth century, when the industrial revolution was in progress, Silas Marner is a pallid man, of thirty nine years of age, who is disillusioned and has placed his trust in his money more then in man. Nevertheless, he still attempts to be social. He is seen by the villagers as especially strange because of the cataleptic fits he occasionally suffers, and his physical contortions required when weaving. This results in a conflict between Silas and the community who rejects him as a misfit even though these superstitious country people attributed supernatural qualities to him. Although there are similar examples of fantasy dispersed throughout the novel, the tone is realistic. The mood in the exposition is one of desperation which, after the inciting force, swings to one of hope and eventually joy. There is a parallel plot, introduced in the third chapter, involving a wealthy family by the name of Cass. The villagers regarded Squire Cass and his two sons as nobility although in truth, they were much poorer then was known. ...read more.

In contrast to Marner's solitude, family surrounded Godfrey. While Silas endured his exclusion from society, Godfrey was impatient and a moral coward. His regret with respect to his secret marriage led him to reject his fatherly responsibilities for Eppie. He was a static character whose motivation for action was dependant on the likely response of his wife both before and after their marriage. He also symbolized the author's view of the shallow moral characteristics of the upper class. "The greatest man in the village of Raveloe was Squire Cass". He was a gentleman of the highest social standing. Eliot depicts in him her view of some of the worst characteristics of this class of society. He had little involvement in the lives of his sons and was rough on them. He ridiculed the villagers, did no work and took comfort in the material pleasures of life. This static character was also depicted as illustrative of his class. Dunstan was the villain of the novel, whose sinful ideas would become realities. Throughout Part One, he succeeded in persuading his brother, Godfrey, to bend to his will. He disbursed the money Godfrey lent him, then caused the death of his brother's horse, and stole Silas's gold. Dunstan was selfish, and oblivious to any moral standards. As with the Squire and his brother, Eliot portrayed him as the product of the upper class. He was dim-witted, and believed in his own luck at other's misfortune. For example, he did not plan robbing Silas, the circumstances just happened to permit it. Nancy Lammeter was also a static character in the novel. She was the recipient of Godfrey's love and affection. Although she remained mysterious throughout the first seven chapters, we learnt of her from the perspective of other characters. She was presented to the reader as a youthful, principled, sensitive girl with a country dialect. In the narrator's view, she was more suitable for Godfrey then his secret wife. ...read more.

Silas' strong belief in the subsequent rewards and punishments for the deeds of man was severely shocked when he was condemned despite his innocence. This betrayal caused his loss of faith in God and man. Throughout the novel, his role could be seen as the puppet of an uncontrollable destiny. In this way, Eliot presented her perception of the overreaching influence of luck and faith on man. George Eliot used characters to comment extensively on religion. The religions of the town from which Silas emigrated and the religion of Raveloe were both Christianity. The dogmatic religious community that Silas left stood in sharp contrast with the humanity and good will that was prevalent in the rural community to which he migrated. The author also examined the distinction between the upper and lower classes in society. She showed her preference for the hard working lower class and attributed higher moral standards to them then to the upper class. For instance, Silas, a stranger to Eppie, insisted on raising her while her natural father, a member of the upper class, ignored her existence. In addition, the author employed a sympathetic tone to depict the lower class while approaching the upper class much more critically. The result was that the reader sympathized much more with the lower class. Section IV - Style George Eliot was able to communicate the feelings of the characters by utilizing the omniscient point of view. As a result, the dialogue was kept to a minimum. Eliot wrote with a direct and precise manner. Each word was chosen for its meaning to ensure that she fulfilled her purpose. When focusing on her characters, she employed lofty words for those of the upper class while using more simple words for those of the lower class. Her sentences were long, sprinkled with punctuation that allowed the reader to appreciate her meaning. When narrating the community's perception of Silas, she used casual, light hearted and colloquial. In contrast, when she narrates from the perspective of an upper class spectator, she became sarcastic and mocking. ...read more.