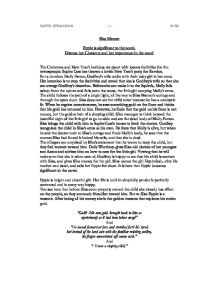 Silas Marner - Eppie is significant to the novel. Discuss her Character and her importance in the novel.

Silas Marner Eppie is significant to the novel. Discuss her Character and her importance in the novel The Christmas and New Year's holidays are spent with joyous festivities for the townspeople. Squire Cass has thrown a lavish New Year's party for Raveloe. But a drunken Molly Farren, Godfrey's wife walks with their baby girl in her arms. Her intention is to stop the festivities and reveal that she is Godfrey's wife so that she can avenge Godfrey's desertion. Before she can make it to the Squire's, Molly falls asleep from the opium and falls onto the snow, the little girl escaping Molly's arms. The child follows the path of a bright light, all the way to Silas Marner's cottage and through the open door. Silas does not see the child enter because he has a cataleptic fit. When he regains consciousness, he sees something gold on the floor and thinks that his gold has returned to him. However, he finds that the gold on his floor is not money, but the golden hair of a sleeping child. Silas manages to think beyond the beautiful sight of the little girl to go outside and see the dead body of Molly Farren. ...read more.

She is a godsend to Silas. "The gold that had asked that he should sit weaving longer and longer, deafened and blinded more and more to all things except the monotony of his loom... And "But Eppie called him away from his weaving, and made him think all its pauses a holiday." But with Eppie work was play and her joy was his joy. "... And warming him into joy because she had joy." Not only does Eppie influence Silas's mental state, working too hard after losing money, but also others around him. She effects his social life. People seem more talkative with him. The townsfolk and people strike up some conversation. When Silas first arrived in Raveloe people were wary of this new anomalous man with herbal knowledge. But Eppie shows a certain softness or sympathetic view over a man. The effect that a grown man, looking after an orphaned child can have a sympathetic, yet kind view on the person. People aren't 'scared' of him any more. They can feel rather congenial toward him. "Hitherto he had been treated very much as if he had been a useful gnome or brownie- a q***r unaccountable creature..." ...read more.

" 'Oh father,' said Eppie, 'what pretty home ours is! I think nobody could be happier than we are.'" Over all Eppie is a principled, well-contended and radiant girl. She affects the whole story on other characters and there judgements of Silas. But most of all Eppie is a great influence on Silas. She connects him to the rest of the world and is a rock for him. She has linked him once more, and brought out of his seclusion. She changes the way people look at Silas for the better. The past and nonconformity around him have been concealed by the love and affection shared by both Silas and Eppie. I think the quote given at the end of chapter fourteen is one that shows Eppie's significance to Silas. "In the old days there were angels who came and took men by the hand and led them away from the city of destruction. We see no white winged angels now. But yet men are led away from threatening destructions: a hand is put into theirs, which leads them forth gently towards a calm and bright land, so that they look no more backward; and the hand may be a little child's." DANIEL SITARANJAN - 1 - 10 HO ...read more.