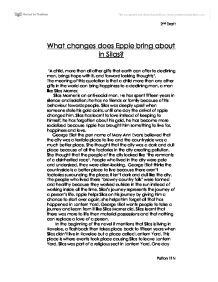 Silas Marner Essay - What changes does Eppie bring about in Silas?

What changes does Eppie bring about in Silas? 'A child, more than all other gifts that earth can offer to declining man, brings hope with it, and forward looking thoughts'. The meaning of this quotation is that a child more than any other gifts in the world can bring happiness to a declining man, a man like Silas Marner. Silas Marner is an anti-social man. He has spent fifteen years in silence and isolation; he has no friends or family because of his behaviour towards people. Silas was deeply upset when someone stole his gold coins, until one day the arrival of Eppie changed him. Silas has learnt to love instead of keeping to himself, he has forgotten about his gold, he has become more socialized because Eppie has brought him something to live for, happiness and love. George Eliot the pen name of Mary Ann Evans believed that the city was a terrible place to live and the countryside was a much better place. She thought that the city was a dark and dull place because of all the factories in the city creating pollution. She thought that the people of the city looked like 'the remnants of a disinherited race'. ...read more.

When Silas broke his brown pot he had for twelve years he showed emotion as if someone had died. This shows that Silas still has some feelings inside. 'Silas picked up the pieces and carried them home with grief in his heart'. One night Silas returned home to find that his money is missing. 'He put his trembling hands on his head and gave a wild ringing scream, the cry of desolation'. This quote shows that Silas was deeply upset; he felt pain and grief because his money was his only joy in life. He feels empty inside. He feels that he no longer has to work because the though of earning money will only remind him of his loss 'As he sat weaving, he every now and then moaned low, like one in pain'. People in the village around him acted kind to him, before they used to ignore him and stare at his strange behaviour, now they greet him and try to cheer him up of the loss of his gold. Silas changed also, normally if someone knocked on his door he would show impatience, but when Dolly Winthrop knocks on his door he would answer it and welcome he into his house 'Formerly his heart had been locked as a casket with its treasure inside, but now the casket was empty, and the lock was broken'. ...read more.

Lantern Yard was describes as a gloomy place because the author wants us to recognize the difference of his life in Raveloe and the one where he used to have in Lantern Yard. Silas Marner's life in Raveloe is much happier because he has Eppie in his life. Silas Marner feels happy now because he has seen how Lantern Yard is and now knows his present life is much more enjoyable. 'Since the time the child was sent to me and I have come to love her as myself, I've had the light enough to trusten by: and now she says she'll never leave me, I think I shall trusten till I die'. The repetition on the word trusten in this quote shows that Silas has restored his trust in man; he has his full trust in Eppie and knows that she will never leave him. The rhyme in this quote also makes it memorable, the rhyming words which are by and die. The garden in the last few paragraphs of the book represents the life that Silas and Eppie have together. This garden also reminds us of the famous garden, the Garden of Eden where Adam and Eve lived. This garden represents the strong love of Silas and Eppie and show that there love is still growing and will never die. ?? ?? ?? ?? 2nd Draft Puifon 11N ...read more.