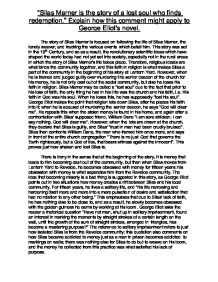 &quot;Silas Marner is the story of a lost soul who finds redemption.&quot; Explain how this comment might apply to George Eliot's novel.

"Silas Marner is the story of a lost soul who finds redemption." Explain how this comment might apply to George Eliot's novel. The story of Silas Marner is focused on following the life of Silas Marner, the lonely weaver, and tracking the various events which befall him. This story was set in the 19th Century, and so as a result, the revolutionary scientific ideas which have shaped the world today had not yet set into society, especially not in the rural areas in which the story of Silas Marner's life takes place. Therefore, religious ideals are what binds the community together, and this faith in religion is what makes Silas a part of the community in the beginning of his story at Lantern Yard. However, when he is framed and judged guilty over murdering the senior deacon of the church for his money, he is not only cast out of the social community, but also he loses his faith in religion. Silas Marner may be called a "lost soul" due to the fact that prior to his loss of faith, the only thing he had in his life was the church and his faith, i.e. ...read more.

George Eliot asks the reader a rhetorical question "Have not men, shut up in solitary imprisonment, found an interest in marking the moments by straight strokes of a certain length on the wall, until the growth of the sum of straight strokes, arranged in triangles, has become a mastering purpose?" The reference to solitary imprisonment refers to just how isolated Silas is from the Raveloe community; this quotation also comments on how Silas became addicted to money just as a man in prison becomes addicted to markings on walls; there was nothing else for Silas to do but to weave on his loom, and the money he collected from this practice was what satisfied his lack of purpose. However, it is in Silas' power to love that he finds redemption. From the story, one can deduce that Silas is a kind-hearted person, i.e. At the beginning of the story, he can see nothing but goodness in his friend William Dane, despite the obvious treachery on William's part. When Eppie, the child of Godfrey Cass (the son of the squire) and Molly Farren (who had recently died due to hypothermia) wandered into Silas' house during one of his cataleptic fits, the first thing he sees when he looks at the child ...read more.

However, when Godfrey Cass and Nancy, his wife, come to Silas' house to tell him that Eppie is in fact Godfrey's daughter and that he wants her back by birthright since Godfrey and Nancy cannot have children, Silas is deeply shocked, so Eppie herself defends Silas " Thank you ma'am - thank you, sir. But I can't leave my father, nor own anybody nearer than him." This shows how close Eppie is to Silas, because she would rather stay with Silas than live with her real father and be the daughter of the Squire. We can see now that Silas has at last found redemption in the love of Eppie, a love which his golden guineas could not provide; for through his love for Eppie, Silas finally establishes links with the rest of his community, e.g. when he goes to find clothing for Eppie as a baby, he asks Dolly Winthrop and gives her half a guinea, but instead, she says "There's no call to buy, no more nor a pair o' shoes; for I've got the little petticoats as Aaron wore five years ago..." Already, Dolly has offered Silas the clothes that her son Aaron wore when he was a baby instead of him paying for them. This is an example of Silas forging social links with the rest of Raveloe. ...read more.