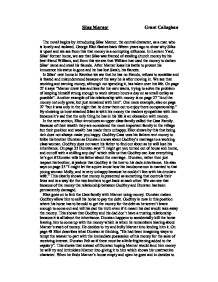 Silas Marner Grant Callaghan The novel begins by introducing Silas Marner, the central character, as a man who is lonely and isolated. George Eliot flashes back fifteen years ago to show why Silas is upset and we see from this that money is a corrupting influence. In Lantern Yard, Silas' former home, we see that Silas was framed of stealing church money by his best friend William, and from this we see that William has used the money to darken Silas' name and steal his fianc�e. After Marner loses his battle to protest his innocence his status is gone and he has lost Sarah, his fianc�e. In Silas' new home in Raveloe we see that he has no friends, refuses to socialise and is feared and misunderstood because of the way he is after moving in. We see that working and earning money, although not spending it, has taken over his life. On page 27 it says "Marner drew less and less for his own wants, trying to solve the problem of keeping himself strong enough to work sixteen hours a day on as small outlay as possible". Another example of his relationship with money is on page 27 "And the money not only grew, but just remained with him". One more example, also on page 27 "but it was only in the night that he drew them out to enjoy there companionship." ...read more.

If the weaver was dead, who had a right to his money? Who would know where his money was hidden? Who would know that anybody had taken it away? He went no further into the subtitles of evidence: the pressing question, "Where is the money?"" In this quote Eliot allows us to get in Dunstan's thoughts and uses money to show it can delude people which is what happened to Dunstan as due to the money he assumed Silas had died outside somewhere. She shows how money can bring out worst in people. Marner is now devastated by his loss of money. On page 94 Eliot says "Marner's thoughts could no longer move in their old round and were baffled by a blank." This shows that Marner is now unable to cope and this makes the reader sympathize with him because for the second time in his life he's lost everything. However, now that Marner is without the money he begins to socialise with the village people and this suggests that money has a powerful influence over which is now broken. On New year's eve, Godfrey's wife, Molly, comes to confront Godfrey at his father's party. She wants money and the position that the wife of a gentlemen would command. Molly blames Godfrey for her poverty even though her addictions to opium and alcohol are the real causes. ...read more.

I wonder if it ever could again- I doubt it might, if I lost you, Eppie." This means he is wondering what effect the money will have on him when Eppie leaves. Eppie is faced with a test. On page 206 Silas says "But you must make sure, Eppie. You must make sure you won't ever be sorry, because you made your choice to stay among poor folks and poor clothes when you might have had everything of the best." This is saying that she is offered wealth and an upper class life but on page 206 she says "I should have no delight in life anymore if I was forced to go away from my father." She is saying that money cannot replace the love she feels for Silas. Eliot uses the money image when Godfrey realises he cannot buy back Eppie when he says on page 209 "There's debts we can pay like money debts, by paying extra for the years that have slipped by. While I've been putting off, the trees have been growing- it's too late now." We see that Godfrey has now learned to take responsibility for his actions. Eliot structures the whole novel around money and it being a corrupting influence. She also presents Godfrey, Marner, Eppie and Dunstan with moral tests which are failed by Dunstan and Godfrey therefore resulting them in being punished while Marner and Eppie being rewarded for passing their moral tests. ?? ?? ?? ?? ...read more.