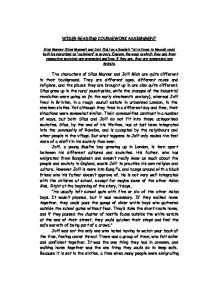 Silas Marner (Silas Marner) and Jolil (Salt On a Snake&amp;#146;S Tail In Come To Mecca) Could Both Be Described As &amp;#147;Outsiders&amp;#148; In Society. Explore the ways in which they and their respective societies are presented and how, if they are, they are in

WIDER READING COURSEWORK ASSIGNMENT Silas Marner (Silas Marner) and Jolil (Salt on a Snake's Tail in Come to Mecca) could both be described as "outsiders" in society. Explore the ways in which they and their respective societies are presented and how, if they are, they are integrated into society. The characters of Silas Marner and Jolil Miah are quite different in their background. They are different ages, different races and religions, and the places they are brought up in are also quite different. Silas grew up in the rural countryside, while the changes of the industrial revolution were going on (in the early nineteenth century), whereas Jolil lived in Brixton, in a rough council estate in urbanised London, in the nineteen sixties. Yet although they lived in a different day and time, their situations were somewhat similar. Their communities contrast in a number of ways, but both Silas and Jolil do not fit into these categorised societies. Silas, by the end of his lifetime, has at last been integrated into the community of Raveloe, and is accepted by the neighbours and other people in the village. But what happens to Jolil only makes him feel more of a misfit in his society than ever. Jolil, a young Muslim boy growing up in London, is torn apart between his different cultures and societies. His father, who has emigrated from Bangladesh and doesn't really know as much about the people and society in England, wants Jolil to practise his own religion and culture. However Jolil is more into Kung Fu, and hangs around with a black friend who his father doesn't approve of. He is not very well integrated with the children at school, except for maybe some of the other Asian kids. Right at the beginning of the story, it says, "He usually left school gate with five or six of the other Asian boys. ...read more.

through this, we know that he has been through a lot when he was only young, and the pain of his sister dying must have been tremendous. Silas has been hurt pretty much all through his life, it isn't a wonder he has no longer any faith. It is this similarity that brings Silas so close Eppie, she is only a small child and cannot let him down as other people can. Again, after discovering the body of Eppies mother, he turns to the community at the Red House for help. He is determined to keep and bring Eppie up alone, instead of giving her up to the parish. Since he now has a child in his care, the community are now beginning top automatically assimilating with him, especially Mrs Winthrop who naturally acts as a mother to Eppie. However, Silas remains very protective of Eppie, he does not want her to leave him, or be taken away from him.. I think he feels that if he relies on Dolly Winthrop too much, he may end up losing Eppie but also tries to remain independent. He is reluctant to accept the help of the neighbours in fear of this. "But she'll be my little un," said Marner rather hastily; "she'll be nobody else's" I would say that he is being rather selfish and not really thinking of Eppie, after all, what Mrs Winthrop is saying in this paragraph is perfectly reasonable and justifiable, and also for Eppie's benefit, and she will be the one most effected by the decisions made about her own future. It is these two people that eventually assist him into taking part in the community. Mrs Winthrop has experience of bringing up children and has valuable knowledge, which Silas should take into account and listen to. I think that Silas quite forgets that the child isn't even his own, and his behaviour is too possessive. ...read more.

even if it isn't very good quality, and they all must have large families. The shopkeeper ridicules them, even though it isn't too obvious from when they first enter the store. Even on the way back they are confronted, because Jolil's father spits onto the streets, provoking the youths however does not anticipate that the two white boys will begin to terrorize them again. After reading this, I feel that Mr Miah made a foolish move, and should have predicted that the whites would respond in this way. Although he tries to tell Jolil to escape while he can, Jolil sees the opportunity that he has been waiting for to show that he can fight like a tiger. Nevertheless, Jolil gets hurt in the attack and when one of the other youths gets injured, they see the chance to make a run for it. Leaving the chairs they rush straight back to their flat. Jolil's mother and brother are quite suspicious as to why Jolil has red marks on his face and why him and his father seem nervous and why. Khalil does not accept his father's answer, but shuts up when he uses God in hid defence, as he doesn't go against Allah. Mr Miah does not arouse much suspicion with Jolil, when he caught in the middle of the night, fiddling with the floorboards underneath the lino in the kitchen. But does warn Jolil not to let anyone find out about the incident, who immediately agrees, as he too ashamed to tell anybody since they ran away instead of facing the bullies. We later find out, that Mr Miah did stick up for them, and stabbed one of the boys, who died. It was obviously the knife, the murder weapon that he was hiding under the floor that night, and the police have already started investigating the murder when Jolil gets back from home. There is an immediate reaction of shock. It has suddenly become obvious that his father had stabbed th white boy in order to get ...read more.