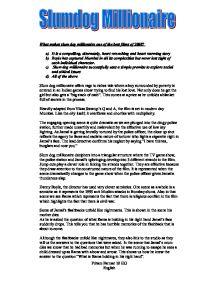 What makes slum dog millionaire one of the best films of 2008? a) It is a compelling, alternately, heart wrenching and heart warming story b) Boyle has captured Mumbai in all its complexities but never lost sight of each individual character. c) Slum dog millionaire successfully uses a simple premise to explore social and ethical issues d) All of the above Slum dog millionaire offers rags to riches tale where a boy surrounded by poverty is entered in an Indian games show trying to find his lost love. Not only does he get the girl but also gets a "big stack of cash". This comes at a price as he unfolds a blanket full of secrets in the process. Heavily adapted from Vikas Swarup's Q and A, the film is set in modern day Mumbai. Like the city itself, it overflows and chortles with multiplicity. The engaging opening scene is quite dramatic as we are plunged into the dingy police station, further made unearthly and malevolent by the effective use of low key lighting. ...read more.

In the scene that Jamal's mum dies we know that he had bad memories but when he was running to escape he sees a child dressed up as Rama with a bow and arrow. This shows us how he knew the answer to the question "What is Rama holding in his right hand". Life in the slums is very different to our way of life as they will do anything to stay alive. This is shown when Salim sold Jamals signed picture of an Indian celebrity that was priceless to him since he had to jump in dung to even have a chance of getting it. Criminal activities dominate life in Mumbai. Salim and Jamal are both caught up in it. As Maman took full advantage of the slums, it had put Jamal and Salim in the line of criminal activity. This is because they had both played a part in the death of Maman. Salim shot him and Jamal insisted they came back to save Latika. ...read more.

One person in particular he hires is Salim. This is because he killed Maman, Javid's enemy with a colt 45 gun. As Salim has always done things against Jamal (.e.g. Slept with Latika, kicked him out and left him on his own) he makes it up to his little brother by letting Latika go to find Jamal at the studio. Doing this Salim risks his life as he gets shot and falls into a bath full of money that he had laid out. But in the process he also kills Javid. Overall this film is much more sophisticated than the plot suggests. It is Bollywood mixed with Hollywood. The city of God is rewritten by Charles Dickens. The film does get a little inelegant at times but they give the finishing touches to a truly remarkable film. Yet I cant help wonder that the film could be clever way to boost the ratings of the boring and tedious ITV1 show "Who wants to be a Millionaire". However the way director Danny Boyle takes on a bewildering mess of contradictory and turns it into a surprisingly pure point breathtaking. Pritam Parmar 10 HG English ...read more.