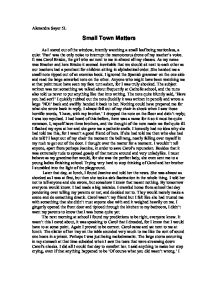 Alexandra Sayer 5L Small Town Matters As I stared out of the window, intently watching a small leaf being motionless, a quiet 'Psst' was the only noise to interrupt the monotonous drone of my teacher's voice. It was Carol Brisko, the girl who sat next to me in almost all my classes. As my name was Bracher and hers Brisko it seemed inevitable that we should sit next to each other as our teachers had a penchant for children sitting in alphabetical order. She handed me a small note ripped out of an exercise book. I ignored the Spanish grammar on the one side and read the large scrawled note on the other. Anyone who might have been watching me at that point must have seen my face turn ashen, for I was truly shocked. The subject written was not something we talked about frequently at Catholic school, and the nuns also told us never to put anything like that into writing. The note quite bluntly said, 'Have you had sex?' I quickly rubbed out the note (luckily it was written in pencil) ...read more.

Perhaps I was just being melodramatic. The large storm occurring in my stomach at that time subsided when I saw the tears that were streaming down Carol's cheeks. I did all I could that day to comfort her. I said anything to make her stop crying, even if that anything happened to be 'Of course what you did wasn't wrong.' I knew very well that it was. I cursed myself when I found out that she did it again. The whole class was talking meaning to us. We didn't know what was happening really, and many of us didn't even believe that what Carol was saying was true. None of us quite understood what was going on, or knew the full extent of it. Behind the 'harmless gossip' that we were spreading lie something much more sinister. I remained Carol's about it and even the older years knew, but what we were talking about had no comforter and adviser and the fountain of all knowledge to everyone else for many weeks before the principle found out. One morning, during registration I was called in to the principle's office. ...read more.

At the end of the day a few of my friends and I were collecting our coats and books from the classroom when our teacher came up to us. We all admired her, for she was our only teacher that wasn't a nun. We all looked up at her in awe until we heard the rage in her voice, at which point we stared at the floor. 'How dare you?' she yelled, 'How dare you do such a thing to that poor girl. I want you to talk to her like a normal person, like nothing has happened. Do you understand me?' We each of us nodded our heads emphatically. Although I didn't quite understand what she meant at the time, the respect of this teacher meant a lot to me and I would have done anything to gain it. So for the rest of my days at school I treated Carol as if nothing had happened and nothing was ever said about the incident. Carol married Jeanine's brother and is an interior designer. I learned a valuable lesson from her that year. I learnt when to keep and when to tell a secret. Based on a true story. Hillside, New Jersey 1963. ...read more.