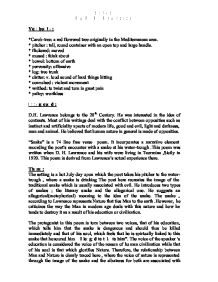 "Snake" By D. H. Lawrence Vocabualry: *Carob-tree: a red flowered tree originally in the Mediterranean area. * pitcher : tall, round container with an open top and large handle. * flickered: moved * mused : think about * bowel: bottom of earth * perversity: offensive * log: tree trunk * clatter: v. loud sound of hard things hitting * convulsed : violent movement * writhed: to twist and turn in great pain * paltry: worthless Background : D.H. Lawrence belongs to the 20th Century. He was interested in the idea of contrasts. Most of his writings deal with the conflict between opposities such as instinct and artificiality apects of modern life, good and evil, light and darkness, man and animal. He believed that human nature in general is made of opposities. "Snake" is a 74 line free verse poem. It incorporates a narrative element recording the poet's encounter with a snake at his water-trough .This poem was written when D. H. Lawrence and his wife were living in Taormina ,Sicily in 1920. This poem is derived from Lawrence's actual experience there. Theme: The setting is a hot July day upon which the poet takes his pitcher to the water-trough , where a snake is drinking The poet here recreates the image of the traditional snake which is usually associated with evil. He introduces two types of snakes ; the literary snake and the allegorical one. He suggests an allegorical(metaphorical) meaning to the idea of the snake. ...read more.

The colour of the snake "earth -brown, earth golden" makes it charming and bright as well as confirms that it is coming from earth's "burning bowels". The words "burning" and "smoking" create an atmosphere of heat. The 6th stanza breaks the silence and tranquility of the previous stanzas as it introduces us to another sound, which is the voice of the poet's reason and education that urges him to kill the snake because it is "venemous".The use of colour here again appeals to the sense of seeing and serves to show the reader how this snake looks attractive. However, the poet admires him and was glad that this snake sought his hospitality and came as a " guest in quiet "to drink and leave peacefully. The simile here: How glad I was he had come like a guest in quiet, to drink at my water-trough" again conforms with the overall idea of the poem which depicts the snake as a tamed ,harmless creature. The 7th and 8th and 9th stanza further enhances human cruelty against nature. The voice of the poet's education or in other words his civilization is inherent in him, he can't get rid of it. He keeps hearing voices and comments which urdge him to "take a stick and break him off". In other word ,to destroy nature and the beauty that he sees and appreciates. The poet starts asking direct questions to himself ,however it shows how confused and preplexed he is between this voice of reason and his instinctive feeling towards this snake which resembles nature and he sees that it didn't harm him, therefore why should he kill this creature. ...read more.

16th stanza ,"Pettiness" the narrator expiates, for his prejudices, his psychological limitations, and then ends up in a tone of repentance and guilt . The poet feels guilty and is left with something to "expiate". Form and Langauge: The poem is written in free -verse with no rhyme scheme and no regular stanzas. This could reflect the irregular movement of the snake as well as the lack of harmony between man and nature in modern time and the sense of confusion the writer feels. The poet uses very simple modern everyday language . He also tends to use narration where you get the feeling that he is narrating a story which is one of the important technique of modern poetry. Moreover, he used this technique to make the reader share with him his feelings and draw a realistic picture of his experience. However, at some points, the writer uses different vocabulary to atrract the attention to turning points in the poem , for example words like "mused", "dignified" , "humility" , " proceed" to refer to the majesty of the snake. To sum up, it is clear that D. H. Lawrence is interested in the idea of contradictions in life. He believes that life is bounded with oppositions. However, in this poem he shows how he appreciates nature and rejects all man's reason and teachings which is based on the stereotype image of the snake. This confusion in the poet's mind is illustrated successfully and effectively in a way that made us identify and sympathize with this snake . ****************** Mrs. Rasha Sakr ...read more.