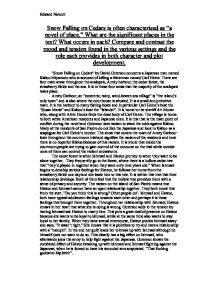 Snow Falling on Cedars is often characterised as &quot;a novel of place.&quot; What are the significant places in the text? What occurs in each?

Snow Falling on Cedars is often characterised as "a novel of place." What are the significant places in the text? What occurs in each? Compare and contrast the mood and tension found in the various settings and the role each provides in both character and plot development. "Snow Falling on Cedars" by David Guterson concerns a Japanese man named Kabuo Miyamoto who is accused of killing a fisherman named Carl Heine. There are four main areas throughout the analepsis, Amity harbour, the cedar forest, the strawberry fields and the sea. It is in these four areas that the majority of the analepsis takes place. Amity Harbour, an "eccentric, rainy, wind-beaten sea village" is "the island's only town" and is also where the courthouse is situated. It is a small and primitive town. It is the harbour to many fishing boats and in particular Carl Heine's boat the "Susan Marie" and Kabuo's boat the "Islander". It is home to the sheriff Art Moran who, along with Alvin Hooks finds the dead body of Carl Heine. ...read more.

Other people do". Ishmael and Hatsue, both have typical adolescent feelings towards each other and perhaps it is these feelings that brought them together. Throughout her relationship with Ishmael, Hatsue knows in her heart that what she is doing is wrong. Guterson adds to the tension by having Ishmael ask Hatsue to marry him. This puts a great deal of pressure on Hatsue because she wants to be loyal to Ishmael, while at the same time also wants to stay loyal to her family. When they have s****l intercourse, Hatsue pushes Ishmael away and says, "It wasn't right." She knows that it is pointless to try and have a relationship with a "hakujin". In the end her guilt leads her to break up with Ishmael although he himself does not want to do so. This clearly has a big effect on Ishmael, who afterwards joins the army to help fight against the Japanese. Guterson shows the combined effect of Hatsue breaking up with Ishmael and Ishmael fighting against the Japanese, when he is forced to have his wounded arm amputated. ...read more.

This is a very significant part of the novel and Ishmael's feelings for Hatsue last throughout the novel, and only diminish at one point during the war when he is fighting the Japanese. His arm has to be amputated and he says "that f*****g goddam j*p b***h". However he ultimately overcomes this r****m by choosing to give Hatsue the shipping records that can prove Kabuo's innocence. He may do this partly because he knows that having Kabuo back will make Hatsue happy, and his feelings for her allow him to do this. Ishmael's struggle to come to terms with losing Hatsue and the loss of his arm at the hands Japanese machine-gun fire portrays the fight against racial prejudice that run throughout the community. Ishmael cannot help but feel hatred toward those that caused him to lose his arm. Coupled with Hatsue's betrayal, Ishmael at times finds it difficult not to blame the Japanese for his unhappiness and loneliness. All of this helps add to the tension and atmosphere of the novel. Edward Notcutt ...read more.