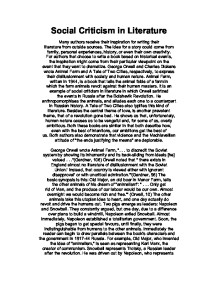 Social Criticism in Literature Many authors receive their inspiration for writing their literature from outside sources. The idea for a story could come from family, personal experiences, history, or even their own creativity. For authors that choose to write a book based on historical events, the inspiration might come from their particular viewpoint on the event that they want to dramatize. George Orwell and Charles Dickens wrote Animal Farm and A Tale of Two Cities, respectively, to express their disillusionment with society and human nature. Animal Farm, written in 1944, is a book that tells the animal fable of a farm in which the farm animals revolt against their human masters. It is an example of social criticism in literature in which Orwell satirized the events in Russia after the Bolshevik Revolution. He anthropomorphises the animals, and alludes each one to a counterpart in Russian history. A Tale of Two Cities also typifies this kind of literature. Besides the central theme of love, is another prevalent theme, that of a revolution gone bad. ...read more.

Snowball represents Trotsky, a Russian leader after the revolution. He was driven out by Napoleon, who represents Stalin, the most powerful figure in the country. Napoleon then proceeded to remove the freedoms of the animals, and established a dictatorship, under the public veil of "animalism." Pigs represent the ruling class because of their stereotype: dirty animals with insatiable appetites. Boxer, the overworked, incredibly strong, dumb horse represents the common worker in Russia. The two surrounding farms represent two of the countries on the global stage with Russia at the time, Germany and England. Orwell begins his book by criticizing the capitalists and ruling elite, who are represented in Animal Farm by Mr. Jones, the farmer. He is shown as a negligent drunk, who constantly starved his animals. "His character is already established as self-indulgent and uncaring." (King, 8) Orwell shows us how, "if only animals became aware of their strength, we should have no power over them, and that men exploit animals in much the same way as the rich exploit the proletariat." ...read more.

Both these characters fall in love with Lucie Manette, the daughter of Dr. Alexandre Manette, unjustly imprisoned in France for 17 years. Though Lucie marries Darnay, Carton still loves her and in the end, gives his life to save Darnay for her. Dickens, who was fascinated with French history, especially the French Revolution, begins by criticizing the aristocrats' treatment of the poor people of France. In the seventh chapter of book two, the Monsieur the Marquis had accidentally driven his carriage over a young child, killing him. Instead of worrying about the child's welfare, the Monsieur's reaction was to worry about his horses: "One or the other of you is for ever in the way. How do I know what injury you have done to my horses."(Dickens, 111) He deemed their lives inferior and insignificant, as illustrated when he threw a gold coin to the child's devastated father as compensation. The Monsieur the Marquis revealed his true sentiments to his nephew: "Repression is the only lasting philosophy. . . fear and slavery, my friend, will keep the dogs obedient to the whip. . . ...read more.