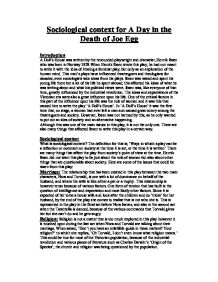 Sociological context for A Day in the Death of Joe Egg

Sociological context for A Day in the Death of Joe Egg Introduction A Doll's House was written by the renounded playwright and dramatist, Henrik Ibsen who was born in Norway 1828.When Henrik Ibsen wrote this play, he had not meant to write it with the idea of it being a feminist play, but only as an exploration of the human mind. This man's plays have influenced theatregoers and theologians for decades, even sociologists take ideas from his plays. Ibsen was raised and spent his young life there but a lot of his life he spent abroad; this affected his ideas of what he was writing about and what his political views were. Ibsen was, like everyone of that time, greatly influenced by the industrial revolution. The ideas and expectations of the Victorian era were also a great influence upon his life. One of the critical factors in this part of the influence upon his life was the role of women and it was this that caused him to write the play 'A Doll's House'. In 'A Doll's House' it was the first time that, on stage, a woman had ever left a man and caused great outcry among the theatregoers and society. ...read more.

Religion: Religion is not a matter that is too much explored in this play however it is touched upon during the last act when Nora and Torvald are talking about their marriage. When asked, 'Don't you have an infallible guide in these matters? Your religion?' to which she replies, 'Oh Torvald, I don't even know what religion means.' This could be true for most of the Victorian population, because of the industrial revolution and various pieces of literature such as Charles Darwin's 'Origin of the Species', the church and religion was being questioned by the population. Role of Women: The role of women during this time was very precise and very set in tradition. The main role of women was being a mother and a house wife. If however she was widowed, she could only do work as an office assistant or something equally 'woman-like' such as embroidery or dress making. Anything other than this would be above her station and not acceptable. This formalised role set out for women by men was one that during the time of the industrial revolution was being broken. ...read more.

The fact that a husband was responsible for his wife's actions in this play makes what Torvald do at the end of the play a reasonable reaction. The one thing that people of the Victorian era valued most is honour and credibility, even above love. This however was not always the case but in the majority of cases this is how it was. Ibsen was in the end, renound for his new style of writing and was given the name 'father of naturalism' because of it. Although technically this style already existed, Ibsen used it to greater effect and refined it. One other influence to be considered is the political out look of Ibsen. Even though he moved around a lot during his life, from country to county. There were still political changes that were arising that could not have just been put aside. Such as Karl Marx's 'Communist Manifesto'. This was the birth of the idea of communism, which challenged the idea of power and was a new idea of politics. This is in a way similar to what Nora does in 'A Doll's House.' So there are indeed outside influences to Ibsen's writing. ...read more.