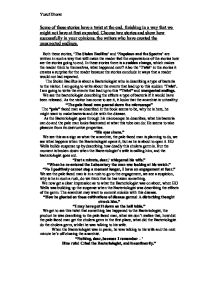 Some of these stories have a twist at the end, finishing in a way that we might not have at first expected. Choose two stories and show how successfully in your opinions, the writers who have created the unexpected endings.

Some of these stories have a twist at the end, finishing in a way that we might not have at first expected. Choose two stories and show how successfully in your opinions, the writers who have created the unexpected endings. Both these stories, 'The Stolen Bacillus' and 'Napoleon and the Spectre' are written in such a way that will make the reader feel the expectations of the stories how are the stories going to end. In these stories there is a sudden change, which makes the reader think to themselves, what happened next? Also the 'Twist' in the stories it creates a surprise for the reader because the stories conclude in ways that a reader would not had expected. The Stolen Bacillus is about a Bacteriologist who is describing a type of bacteria to the visitor. I am going to write about the events that lead up to this sudden 'Twist'. I am going to write the events that lead up to this "Twist" and unexpected endings. We see the bacteriologist describing the effects a type of bacteria if it would have been released. As the visitor has come to see it, it looks that the anarchist is unhealthy. "The pale faced man peered down the microscope" The "pale" faced man as described in the book seems to be, why he is here, he might want to make bacteria and die with the disease. ...read more.

The Bacteriologist appears to have gone mad he had gone with no shoes on, he was really eager to get the anarchist. The cabmen appear to do not know what's happening but are keen to enjoy it. "Chorus: 'Go it, George!' It's a race!' 'You'll catch 'em!' 'Whip up!'" As Minnie was coming through the race the public has obviously caught the attention of the race, it was coming to be a bit of a comedy because it was going to become to be a three horse race between them. "Minnie went by in a perfect roar of applause. She did not like it but she felt that she was doing her duty, and whirled down on Haverstock Hill and Camden Town High Street." When we see the chase happening what's so funny that the anarchist is acting like if the bottle was his son. He is looking after it very carefully. "He fell back into the seat with a curse, and stared dismally at the two or three drops of moisture on the apron." He is sad to see that the glass is broken but stills plans to destroy himself. We see that this anarchist is trying to prove to people what he really can do because every one laughs at him when he does something which everyone thinks that he is making a fool out of himself. ...read more.

"Where am I?" Marie Louise: "In my private drawing-room," We see here that due to the spectre in his, it feels like that a virus has infected Napoleon's mind. And the Empress explains to him that events to the events which lead him to the drawing room. "I suppose from the astonishment you now testify that you are now watching in your sleep." The Empress tells Napoleon this and he is thinking so much about the doubts, that he thought to himself that there was a ghost near me. Towards the end we see the unexpected ending which comes into place when due to the emperor Napoleon sleep walking, he is thinking so much that he goes into a fit of catalepsy but what's unexpected the amount that he is unconscious for. "The Emperor immediately fell into a fit of catalepsy in which he continued during the whole of that night and the greater part of the next day." In this story we see that it reaches the anti-climax stage, when he is unconscious. What is going to happen to Napoleon when he wakes up. We see from these short stories that the events that lead up to the twist coming into place, like in 'The Stolen Bacillus' we see that the subject is being switched completely, and in 'Napoleon and The Spectre' the places are different and it reaches an anti-climax. The unexpected endings start to quiz yourself because you don't know what really has happened or in some cases you have. Yusuf Dhorat ...read more.