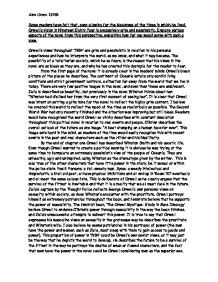 Some readers have felt that, even allowing for the bleakness of the times in which he lived, Orwell's vision in Nineteen Eighty Four is excessively grim and pessimistic. Explore various aspects of the novel from this perspective.

Some readers have felt that, even allowing for the bleakness of the times in which he lived, Orwell's vision in Nineteen Eighty Four is excessively grim and pessimistic. Explore various aspects of the novel from this perspective, explaining how far you would agree with such a view. Orwell's views throughout '1984' are grim and pessimistic in relation to his personal experiences and how he interprets the world, as we know, and what it may become. The possibility of a totalitarian society, which he so fears, is the reason that his views in the novel are as bleak as they are, and why he has created this dystopia for the reader to fear. From the first page of the novel it is already clear in the readers' minds Orwell's bleak picture of the places he describes. The continent of Oceania entails only sordid living conditions and strict government controls, a situation far away from the world that we live in today. There are very few positive images in the novel, and even then these are ambivalent. Julia is described as beautiful, but previously in the novel Winston thinks about her; "Winston had disliked her from the very first moment of seeing her". It is clear that Orwell was intent on setting a grim tone for the novel to reflect the highly grim content. I believe he created this world to reflect the mood of the time as realistically as possible. The Second World War had only recently finished and the situation was improving but still bleak. ...read more.

In fact, at the time, due to the growing Communist threat, the book was highly regarded by many people as predicting the future. We now know that the world of Oceania, or something similar, is very unlikely to happen but we can appreciate that it could have happened at the time Orwell wrote. Personally, the book appears extremely grim but then we must remember that Winston and Orwell were campaigning to eliminate the threat of Communism and Totalitarianism, and Orwell presumed the extremities he goes to create fear within the reader was the only way to get people to notice his work. It is not only through Winston that Orwell creates his message however, but also through descriptions of the terrible scenery and landscape surrounding him. He lives in a tired old block of flats in which the lifts do not work, all of the streets are dingy and badly lit at night and the only tranquil places are those off limits to party members, such as the wooded area where Julia and Winston first make love and the small room above Mr. Charrington's shop. Again, it is a feeling of helplessness that Orwell commands so brilliantly that makes the world seem so bad. The way in which the Government lie to party members, saying they are making things better but things are getting worse for example, that creates such a bleak outlook. The reader cannot help but feel helpless reading the book when all around them is doom and gloom. It becomes again apparent that Orwell creates a pessimistic view in '1984', but then it is important to bear in mind he does so as a warning for the world of what he believes will happen in the future. ...read more.

We empathise with Winston throughout his encounters with O'Brien and the thought police, and in that respect Orwell is successful in putting his message across. However it is also clear, like in all of Orwell's novels, that Winston is an unsatisfactory hero who does not express signs of his own power or knowledge, but relies on others such as O'Brien and Julia to guide him through his life. Orwell creates an extremely grim and pessimistic view of the future in '1984', and uses his personal views and plays on strong nationalistic fears such as Communism and the devastation of war to create his political warning. Recent events such as the n**i threat and World War 2 are included in the book and he uses the bleakness of the times to get his message across. The way in which Winston and other characters in the book are constantly referred to as powerless and their eventual death creates an onslaught of pessimism from Orwell; the Party and its surroundings are consistently grim and relationships and love do not prevail; this is realism in its most disillusioned form. I believe that despite the harsh surroundings and grimness, it is not overly so. This is due to the fact that Orwell tries to create a political warning for the world that he believes to be a realistic situation in the future, and to an extent he succeeds. The world has seen televisions in every household and ongoing war and dictators' attempts at continental domination in every year since the book was written. It is because of Orwell's selfless intentions in the book that he succeeds in making a pessimistic yet possible view for the future. Word count: 2722 ?? ?? ?? ?? Alex Green 13PJR ...read more.

A detailed answer to the question, all be it in quite a lengthy format. Candidates would not be expected to write this length of essay for an examination or coursework. However, this does not detract from a very good investigatatory ...

A detailed answer to the question, all be it in quite a lengthy format. Candidates would not be expected to write this length of essay for an examination or coursework. However, this does not detract from a very good investigatatory essay which explores various perspectives of the 'bleakness' in 1984. Whether it be historical (ie post-war London or Stalinist Russia) or simply a fictional vision of the future.

Very high, as is to be expected with such a lengthy essay. This candidate explores historical context, the fictional world that Orwell creates and Winston's inner feelings as different perceptions of 'bleakness'. Equally, they analyse the text itself and Orwell's literary techniques to explore these ideas.

Perfectly good, spelling, punctuation and grammar are all fine. Sentence structure and the overall composition of the essay is also of a high standard and should be noted by any prospective candidates.