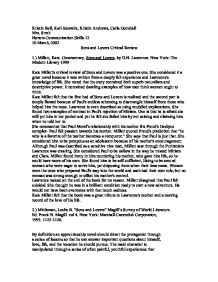 Kristin Bell, Kari Iskowitz, Kristin Andrews, Carla Gottshall Mrs. Stroh Honors Communication Skills 12 10 March, 2002 Sons and Lovers Critical Review 1.) Millett, Kate. Commentary. Sons and Lovers. by D.H. Lawrence. New York: The Modern Library 1999 Kate Millett's critical review of Sons and Lovers was a positive one. She considered it a great novel because it was written from a deeply felt experience and Lawrence's knowledge of life. She noted that the story contained both superb naturalism and descriptive power. It contained dazzling examples of how men think women ought to think. Kate Millett felt that the first had of Sons and Lovers is realized and the second part is deeply flawed because of Paul's endless scheming to disentangle himself from those who helped him the most. Lawrence is even described as using muddled explanations. She found two examples of contrast in Paul's rejection of Miriam. One is that he is afraid she will put him in her pocket and yet he felt she failed him by not seizing and claiming him when he told her to. ...read more.

The main character is manipulated through a series of often painful, youthful experiences that take him from innocence and naivete about love and life to knowledge and understanding, from ignorance of himself to self-revelation and understanding, and from uncertainty of life vocation to fulfilling and satisfying destinies. D.H. Lawrence's novel, Sons and Lovers, challenges all the rules. In this novel, the protagonist, Paul Morel has failed to resolve any of these important life questions satisfactorily. In terms of his love relationships he is incapable of having an intense physical and emotional relationship with a woman. Because of the unresolved, problematic relationship he had with his father and the excessive, crippling love from his mother, Paul is unable to learn about love through life experiences. We see in his relationship with Miriam, that he is unable to submit himself physically to her although in the spiritual aspect of their relationship he is able to give himself to her completely. On the other hand, his relationship with Clara, although satisfying sexually, is devoid of spiritual depth. ...read more.

Paul's sexual desires become too strong, and due to the lack of response from Miriam, Paul becomes cruel because he is unable to give his soul to her like she gave it to him because his mother owns his soul. Sullo also describes Paul's relationship with Clara. She believes that this relationship was merely sexual convenience. Paul fears that Clara has gained power over him and leaves her to stay with his dying mother. The latter half of the review talks mainly of the relationship of Paul Morel and Baxter Dawes and the possibility of a homosexual relationship between the two of them. Sullo describes their fighting as a metaphor for homosexual bonding. Paul and Baxter begin a sort of courtship where Paul brings him gifts, and visits him while he is ailing, and also finding him lodging and a job later. There is also the idea that Paul sees Baxter as the father that he never had, attempting to reconcile Baxter and Clara, as he would like to with his mother and father. Every relationship in the book deals with power struggles. It is said that these power struggles are important because they are the death of love. ...read more.