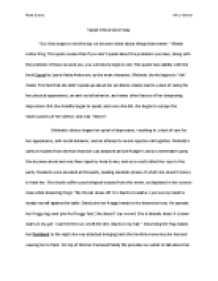 ﻿Matt Guthy Mrs. Palmer Speak Critical Lens Essay ?Our lives begin to end the day we become silent about things that matter.?-Martin Luther King. This quote means that if you don?t speak about the problems you have, along with the problem of those around you, you will slowly begin to die. This quote has validity with the book Speak by Laurie Halse Anderson, as the main character, Melinda, slowly begins to ?die? inside. The fact that she didn?t speak up about her problems clearly lead to a lack of caring for her physical appearance, an anti-social behavior, and many other factors of her deepening depression. But she steadily began to speak, and once she did, she began to escape the repercussions of her silence, and was ?reborn?. Melinda?s silence began her spiral of depression, resulting in: a lack of care for her appearance, anti-social behavior, and an attempt to avoid rejection all together. Melinda?s silence resulted from the fact that she was attacked at Kyle Rodger?s senior cheerleader party. She became drunk and was then raped by Andy Evans, and as a result called the cops to the party. ...read more.

While in school, she cuts many of her classes to spend time in an abandoned janitor?s closet. While inside she cleans and refurbishes the room, and covers the mirror in the closet with a poster. The covering of the mirror is symbolic as it shows that she dislikes herself so much that she has trouble even looking at herself. The janitor?s closet itself represents herself with her depression and solitude. Another incident was when the school?s basketball team had won its first game and David Petrakis, her lab partner, decided to throw a party to celebrate the victory. David invites her, but she declines and claims that she has ?homework, strict parents, tuba practice? and other ridiculous excuses. While this is one of the few real chances she gets to be social, she declines it and goes back to her solitude because of what happened at Kyle Rodger?s party. The feelings that Melinda has and the events that occur because of them show that she needs to speak up about the attack and of her problems so she stops ?dying? and can finally be ?reborn?. ...read more.

Although Rachel did not heed Melinda?s warning about Andy, it was an important breakthrough for Melinda as it was the first time she told anyone about her attack. Andy somehow hears of this and once again attacks Melinda, but this time while she is in her closet. During the attack, the poster covering the mirror falls down, and the mirror shatters. She screams and uses a broken shard of the mirror to defend herself until the lacrosse team arrives. This event ultimately symbolizes her ?rebirth?, as the reappearance of the mirror symbolizes the newfound caring for her physical appearance and a great increase in her self esteem. The fact that she screamed during the attack represents the fact that she will finally speak about her problems, and therefore will be reborn. The quote by Martin Luther King unquestionably relates to Melinda; when she stopped speaking she clearly began to ?die?, and when she spoke again she was ?reborn?. Her problems progressively became worse, but when she spoke up about the attack all of her problems began to change. It is clear that ?Our lives begin to end the day we become silent about things that matter.? ...read more.