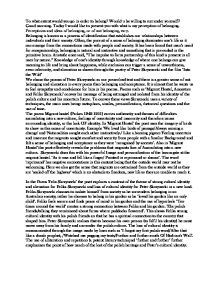 Speech: To what extent would you go in order to belong? Would u be willing to surrender yourself?

To what extent would you go in order to belong? Would u be willing to surrender yourself? Good morning. Today I would like to present you with what is my perception of belonging. Perceptions and ideas of belonging, or of not belonging, vary. Belonging is known as a process of identification that establishes our relationships between individuals and their society. Often, the pursuit of a sense of belonging dominates one's life as it can emerge from the connections made with people and society. It has been found that man's need for companionship, belonging is natural and instinctive and something that is pre-coded in the primitive brain. Aristotle once said, "The impulse to form partnership of this kind is present in all men by nature." Knowledge of one's identity through knowledge of where one belongs can give meaning to life and bring about happiness, while exclusion can trigger a sense of unworthiness, even inferiority, and alienation as shown through the poetry of Peter Skryznecki and the film 'Into the Wild' We chose the poems of Peter Skrzynecki as our prescribed text and there is a greater sense of not belonging and alienation in every poem than belonging and acceptance. ...read more.

The use of alliteration and repetition (a potent literary technique) 'further and further' further emphasises the point of how much of the lost of the polish heritage and Peter's cultural identity. The poem 'Ancestors' is an interesting and enigmatic poem that raises many questions and images but gives little definite comment. The poem encourages the audience think about their past and the people who are responsible for our existence. These figures seem to appear to the poet in a dream but cannot communicate with him. There is a clear spiritual connection between the persona and these "bearded, faceless men/standing shoulder to shoulder?' which is a collective term and creates a sense of belonging with the use of alliteration but the rhetorical question undercuts this belonging by confusing the audience. There is also a real sense of uncertainty about his identity as 'they whisper into the darkness". The poet's continual use of "they" emphasises his lack of knowledge about his ancestors. There is a sense of frustration in the final stanzas. The poet sees clearer faces yet he awakens and cannot speak 'Why do you wake as there faces become clearer'. ...read more.

The voice over's and written diary shots provide an incentive to the actions of Christopher and how he feels about them. A major concept of belonging to society is portrayed as the most important custom in ones life. The realization of the concept of belonging to society to live can clearly be seen after the death of Christopher. The montage of Christopher's past at the end of the film puts together the memorable moments in his life which ironically were all related with his family. It shows him hugging his parents and finally realizing the value of belonging to a society. This realization is also backed up by the closing statement of Chris writing in his diary in his last moments "Happiness is only real when shared". This immediately portrays belonging to society as a necessity to feel happy and valued. The poetry of Peter Skrzynecki and The film' Into The Wild" demonstrate that without a sense of belonging, which in essence arises from knowing one's identity, the individual is incomplete, Hence, life is incomplete. Realizing one's identity, through finding a place where one belongs is a key piece in the puzzle that is contentment. Even a life without belonging is consumed by the yearning to belong-showing that a life untouched by belonging is a life in which satisfaction hence happiness is unattainable. ...read more.