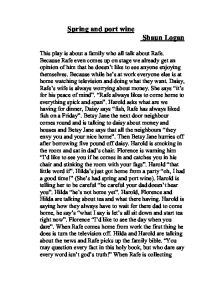 Spring and port wine Shaun Logan This play is about a family who all talk about Rafe. Because Rafe even comes up on stage we already get an opinion of him that he doesn't like to see anyone enjoying themselves. Because while he's at work everyone else is at home watching television and doing what they want. Daisy, Rafe's wife is always worrying about money. She says "it's for his peace of mind". "Rafe always likes to come home to everything spick and span". Harold asks what are we having for dinner, Daisy says "fish, Rafe has always liked fish on a Friday". Betsy Jane the next door neighbour comes round and is talking to daisy about money and houses and Betsy Jane says that all the neighbours "they envy you and your nice home". Then Betsy Jane hurries off after borrowing five pound off daisy. Harold is smoking in the room and sat in dad's chair. Florence is warning him "I'd like to see you if he comes in and catches you in his chair and stinking the room with your f**s". Harold "that little word if". Hilda's just got home from a party "oh, I had a good time!" (She's had spring and port wine). Harold is telling her to be careful "be careful your dad doesn't hear you". ...read more.

Arthur sees his new over coat "that looks a gradely bit of top coating". Rafe "always buy the best if you can afford it, you won't go far wrong". The family are talking about work and jobs and Arthur may be getting promoted but he needs to be married. Arthur "Mr. Aspinall is going to promote a worker but a married one". Rafe "if you take things laying down in this life, and every upstart will trample over you". Arthur wants to marry Florence and she wants to work as a teacher but Rafe doesn't like that idea. Rafe "I'd certainly never let a wife of mine go out to work". Rafe and Arthur are talking about the wedding and Arthur wants to get wed as soon as possible so he can have the job, but Rafe doesn't like that idea. "If you're the lass I think you are Florence, you'll tell mr Alf Aspinall when a Crompton gets married they choose the time not him". Hilda has had some spring and port wine and is upset over her dad been mean and say's "it's our rotten old father, its mr bighead Crompton". Florence "yes, because you're farther cares for you". Hilda "he cares for his bloomin' self". Wilfred "no I think he honestly cares". In act one Hilda wouldn't eat her herring and that is why she was upset with her dad, but it has been bought back up again in act two. ...read more.

chaps sitting in our front room playing cards, and when I went through into the back kitchen there was my mother, and she was trying to gas herself at the gas stove". By now the audience have changed there opinion of Rafe from a mean, tight, killjoy to a loving caring man who just wants to take care of his family the best he can. Later on Rafe is kinder toward people and a little light hearted. Rafe "it's better to marry than to burn. Don't mind the cost Arthur. I can pay for it". Hilda is set on leaving home. Rafe "leave home, eh? I envy you. I only with I could leave home". Rafe talks about the way he has been coming home from work and has got to the top of the road and wanted to turn the other way. The audience know that this is not true as he is trying to make them feel guilty for wanting to leave home. Then he goes on to tell them about what they all do that they think he doesn't know about. Rafe "mother, with that frozen look of honesty she put on her face after the last minute fiddling of the house keeping accounts". Now the audience know in the end he's not as bad as they thought to begin with, but he is a nice, kind, loving and caring father and husband. ...read more.