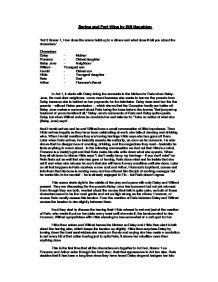 Spring and Port Wine by Bill Naughton'Act 2 Scene 1, How does the scene build up to a climax and what does it tell you about the characters'.

Spring and Port Wine by Bill Naughton 'Act 2 Scene 1, How does the scene build up to a climax and what does it tell you about the characters.' Characters Daisy - Mother Florence - Oldest daughter Betsy Jane - Neighbour Wilfred - Youngest son Harold - Oldest son Hilda - Youngest daughter Rafe - Dad Arthur - Florence's fianc� In Act 1, it starts with Daisy doing the accounts in the kitchen for Rafe when Betsy-Jane, the next-door neighbour, come round because she wants to borrow five pounds from Daisy because she is behind on her payments for the television. Daisy does lend her the five pounds - without Rafes permission -, which shows that the Crompton family are better off. Betsy Jane makes a comment about Rafe being the boss before she leaves, "that jumped-up husband of yours handles it all," Betsy Jane's comments of Rafe and Daisy quite upsets Daisy but when Wilfred arrives he comforts her and tells her to "Take no notice of what she (Betsy Jane) says". Next Harold arrives and he and Wilfred have a small conversation of little importance. Then Hilda arrives happily as they have been celebrating at work, she tells of dancing and drinking wine. When Harold mentions they are having herrings Hilda says she has gone off them. Later when Rafe arrives, he instantly asserts his authority, as soon as he comes in. He also shows that he disapproves of smoking, drinking, and the magazines they read - basically he finds anything to moan about. ...read more.

Tension in the room is now strong and there is an atmosphere that you could cut with a knife. Rafe then quickly works out that Wilf went out to the kitchen; he then orders Wilf to0 hold out his hands so he can smell them. This tells you something about Rafe's character because he is very quick in finding out who did it and it shows that he is very observant to spot Wilf going into the kitchen whilst they were singing around the piano. The tension has now started to mount even more as Rafe has singled Wilf out. As Rafe is interrogating them, it shows he is very dominant and his family are afraid of him. After smelling Wilfs hands as it says in the book, 'Rafe knows something but keeps it to himself'. Then he starts to pick on Wilf insisting that he swear on the bible that he did not do it. This amazes everyone and they all try to save Wilfred even Arthur protests to Rafe that he should not 'press the lad anymore' but Rafe will not back down. Everyone is very tense at this moment as the tensions are strong. The tensions have not yet got to the climax but everyone can see and sense that it soon will if Rafe continues to push. This shows you that Rafe is extremely insistent and stubborn - strong headed - as he just wont stop till he has found out the truth and got his own way also it shows even more what a bully Rafe is. ...read more.

starts at the middle of the play and the end builds up to the highest climax of the tension of the play. Notice the climax does not come at the end but in the middle. This is probably because like most stories it has a beginning where you are introduced and start to get to know the characters, the surroundings and the situation, a middle where all the action happens and the end where the conclusion is. Tension is worst when Wilfred faints because this tension starts building up slowly throughout the play until they all get it out of themselves during the climax and after that in the end, they work things out eventually. Rafe causes almost all the tension and atmosphere in this play. Every time he came home from work or walked into a room the tension would instantly go up as they all seem scared of him and they try very hard to tiptoe around him in order not to upset him because he is such a prickly character. As the story is mostly based about the fact that Hilda wont eat the herring and Rafe is forcing her to every mealtime until she does, this is also what causes the tension and leads up to the climax. However, this tension is also caused by Rafe because of his stubbornness and dominant character. As he is the boss he thinks everyone should obey him, including Hilda, although she is just like him - a prickly, rebellious character and Rafe is not prepared to back down. ...read more.