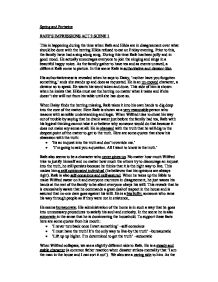 Spring and Portwine RAFE'S IMPRESSIONS ACT 2 SCENE 1 This is happening during the time when Rafe and Hilda are in disagreement over what should be done with the herring Hilda refused to eat on Friday evening. Prior to this, the family have had a sing along song. During this time Rafe has been jolly and in good mood. He actually encourages everyone to join the singing and sings in a beautiful happy voice. As the family gather to have tea and as events unravel, a different Rafe come to picture. In this scene Rafe is authoritative and dictator-like. His authoritativeness is revealed when he says to Daisy, 'mother have you forgotten something,' ands she stands up and does as requested. He is an un-moved character, a dictator so to speak. He wants his word taken and done. This side of him is shown when he insists that Hilda must eat the herring no matter what it takes and if she doesn't she will not from his table until she has done so. When Daisy finds the herring missing, Rafe takes it into his own hands to dig deep into the core of the matter. Here Rafe is shown as a very reasonable person who reasons with sensible understanding and logic. ...read more.

He should also be firm and authoritative and move around with his head up and his hands in his pocket to show his pride and self-consciousness. He should speak in a firm and articulate tone. As the scene ends, I would tell the actor to look concerned that Wilfred collapsed but still keep his head high because his resolution has succeeded. RAFE'S IMPRESSIONS: ACT2 SCENE 3 This is the scene after Rafe discovers that his overcoat is missing. In this scene we see a completely different side to him altogether. When he discovers that his overcoat is missing, the manner in which he requests its whereabouts is calm and polite. This is what he says when he requests about the overcoat, 'Mother! Mother! Where you have you put my overcoat? It's not in the wardrobe. Can you come and help me find it love or I'll be late? The tone with which Rafe is talking in does not seem harsh or authoritative but it is more of a pleading tone than a demand than a demanding on, as was the case in the herring scene. Words like can, help, and love make his sentence sound polite and at ease. When Daisy is emotionally drained by what she has done and asks Rafe to hold her in his arms, we see a caring and passionate Rafe. ...read more.

She always kept her debts hidden from him. This in fact is the reason why he has turned out to have an obsession with the truth. He also mentions one particular incident when he was young. In this incident, he had just come from school and he found two bailiff chaps in the dining room. Going to the kitchen, he found his mother trying to gas herself at the gas stove. That horrific memory has stayed with him always and from that day he had vowed never to have a debt in his life, not even to owe a single penny. He tell of the misery he went through and how nothing could ever pay back those memories. Eventually, this culminates in him turning out to be the sort of man that he is externally but not the man that he really is internally. In directing this film, I would tell the actor playing Rafe to show emotion and be supportive. He should stand facing Daisy to show that he is giving her maximum attention. He should speak in a polite and pleading tone, one that shows remorse. He should have a distraught and dishevelled look as he runs up the canal in search of Daisy to show that he has lost those thoughts of dignity and control. I would also tell the actor playing Daisy to physically run out of the house and if in a theatre, even just down the aisle of the theatre. ...read more.