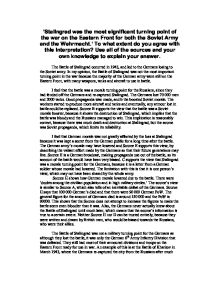 'Stalingrad was the most significant turning point of the war on the Eastern Front for both the Soviet Army and the Wehrmacht.' To what extent do you agree with this interpretation? Use all of the sources and your own knowledge to explain your answer.

'Stalingrad was the most significant turning point of the war on the Eastern Front for both the Soviet Army and the Wehrmacht.' To what extent do you agree with this interpretation? Use all of the sources and your own knowledge to explain your answer. The Battle of Stalingrad occurred in 1943, and led to the Germans losing to the Soviet army. In my opinion, the Battle of Stalingrad was not the most important turning point in the war because the majority of the German army were still on the Eastern Front, with many weapons, tanks and aircraft to use in battle. I feel that the battle was a morale turning point for the Russians, since they had fended off the Germans and re-captured Stalingrad. The Germans lost 70 000 men and 2000 tanks. Good propaganda was made, and b the boosted Soviet morale. The workers started to produce more aircraft and tanks and eventually, any armour lost in battle could be replaced. Source B supports the view that the battle was a Soviet morale booster, because it shows the destruction of Stalingrad, which implies that the battle was b****y and the Russians managed to win. ...read more.

The Battle of Stalingrad was not a military turning point for the Germans as although they lost the battle, it was only the German 6th Army Infantry Division that was defeated. They still had most of their armoured divisions and troops on the Eastern Front ready for use in war. An example of this is at the Battle of Kharkov in March 1943, where the Germans re-captured the city from the Russians after much street fighting. 240 000 Russians were captured. This shows that the Germans still had the capabilities to win a battle and also, to hold a long, drawn out campaign. Source A supports the view that the battle was a military turning point for the Germans, because it describes them collapsing and facing an inevitable defeat. Source G also shows that the German army was unaffected by the loss at Stalingrad because they went on to win at Kharkov as 'masters of the field'. It was written 30 years after the war, which meant that the British historian, who wrote it, would not have any reason to be biased. ...read more.

The Russians had 400 more aircraft than the Germans, and so these aircraft achieved air superiority for the Russians. This then allowed them to attack German tanks very easily with anti-tank rockets. The Russians had 3600 tanks and the Germans had 2700, which gave the Russians an advantage. After the Battle of Kursk, the German army on the Eastern Front was destroyed, and so this left a clear path for the Russians to Berlin. Foreign aid is an important turning point as well. The Russians received many resources and weapons from the Allies and without them, Russia might not have won. The Allies also destroyed German factories and rail links between Germany and the USSR, which significantly halted to process of building German armour. In conclusion, I feel that the Battle of Stalingrad was not the most important turning point in the war, since the Germans had the majority of the armoured forces still left on the Eastern Front. This view is best supported by Source G. I feel that the most significant turning point in the war was the Battle of Kursk because it was where the Germans lost all their tanks and aircraft. It signalled the beginning of a slow retreat by the Germans and ended in an Allied victory. ...read more.