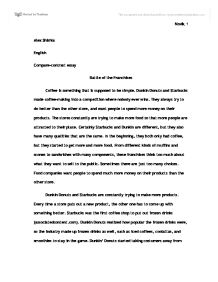 Alex Shishla English Compare-contrast essay Battle of the Franchises Coffee is something that is supposed to be simple. Dunkin Donuts and Starbucks made coffee-making into a competition where nobody ever wins. They always try to do better than the other store, and want people to spend more money on their products. The stores constantly are trying to make more food so that more people are attracted to their place. Certainly Starbucks and Dunkin are different, but they also have many qualities that are the same. In the beginning, they both only had coffee, but they started to get more and more food. From different kinds of muffins and scones to sandwiches with many components, these franchises think too much about what they want to sell to the public. Sometimes there are just too many choices. Food companies want people to spend much more money on their products than the other store. Dunkin Donuts and Starbucks are constantly trying to make more products. ...read more.

Starbucks uses Italian names for their cup sizes and drink names to appear more elegant and exotic. People like to "try new things," and Starbucks changes the name of a regular medium coffee, and all of a sudden people want to buy it because it is exotic to them. People think that if they will drink "better" coffee then they will be considered more important. It is the same thing as buying a pair of jeans from Hollister that cost sixty dollars when a pair of jeans could be bought at Kohl's for twenty dollars. Buying expensive jeans is a waste of money, just like buying a medium coffee at Starbucks when Dunkin' Donuts sells the same coffee for less. Starbucks wanted more people to hear about their business, so they started coming up with gift cards that the costumers distributed to their friends and family. Dunkin' realized how good of an idea that is, so they came up with gift cards of their own and started putting out commercials. ...read more.

Starbucks tries to attract more people by putting in more sugar into their coffees, and it is surely working because people have been known to run after the sweet stuff. People who have more money tend to go to Starbucks because they think they are too good for Dunkin'. Those rich men and women are missing a lot from their coffee drinking experience by not getting better tasting coffee for a cheaper price. Surely the Starbucks and Dunkin Donuts franchises know how to keep the competition intense. Dunkin Donuts started the first coffee brewery and it is still on top. There was a poll put on AOL that asked people which kind of coffee tasted best. Dunkin Donuts had the most votes in that category (associatedcontent.com). Dunkin' stores advertise more than Starbucks do, and these commercials are attracting more people. Starbucks changes their products to stay in competition with the Dunkin' Donuts recipes. Certainly the coffee that has been around the longest will always be around. Starbucks and Dunkin donuts run their businesses differently, but there are many components in the work place that are the same. ...read more.

This essay quotes one source of reference and mostly has the characteristics of a subjective rant rather than a discussion. For the most part, the writer seems to prove the opposite of his/her statement that "nobody ever wins". The examples of the "battle" given here demonstrate how the two companies compete head-to-head to improve the quality and range of the service they offer, presumably to the benefit of their company profits; and teachers get gift cards from their pupils! Wow! It seems more like a "win-win"...

The essay is generally well-constructed, with good sentence and paragraph control and only a few mistakes of grammar and word choice. It has a clear introduction and conclusion.