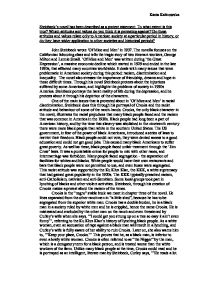 Steinbeck's novel has been described as a protest statement. To what extent is this true? Which attitudes and values do you think it is protesting against? Do these attitudes and values relate only to American society at a particular period in history, or do they have wider application to other societies and historical periods? John Steinbeck wrote 'Of Mice and Men' in 1937. The novella focuses on the Californian labouring class and tells the tragic story of two itinerant workers, George Milton and Lennie Small. 'Of Mice and Men' was written during 'the Great Depression', a massive economic decline which started in 1929 and ended in the late 1930s, that affected many countries worldwide. It deals with many issues that were problematic in American society during this period: r****m, discrimination and inequality. The novel also stresses the importance of friendship, dreams and hope in these difficult times. Through his novel Steinbeck protests about the injustices suffered by some Americans, and highlights the problems of society in 1930s America. Steinbeck portrays the harsh reality of life during the depression, and he protests about it through his depiction of the characters. One of the main issues that is protested about in 'Of Mice and Men' is racial discrimination. Steinbeck does this through his portrayal of Crooks and the r****t attitude and behaviour of some of the ranch-hands. Crooks, the only black character in the novel, illustrates the racial prejudices that many black people faced and the r****m that was common in America in the 1930s. Black people had long been a part of American history, and by the time that slavery was abolished in the nineteenth century there were more black people than white in the southern United States. The US government, in fear of the power of black Americans, introduced a series of laws to restrict their freedom. Black people could not vote, they were denied access to a good education and could not get good jobs. ...read more.

Curley's wife, who, despite being married to Curley, is quite lonely and insecure, tries to befriend Lennie. She notices Lennie's mental inferiority but she is not outright cruel to him, '"You're nuts," she said, "But you're a kinda nice fella. Jus' like a big baby."' Though he is mentally retarded, Lennie can be quite sly and crafty when he wants to be, and is able to manipulate George. Lennie also shows signs of adult maturity. Steinbeck tries to convey the idea that a man does not have to be highly intelligent to be mature and cunning. The only person on the ranch who truly understands Lennie is George. Lennie is very dependent on George, who, unlike himself, is quick-witted and intelligent. George takes responsibility for Lennie, partly for affection and companionship and partly out of pity. The friendship is very important to Lennie, as George looks out for him and tries to keep him out of trouble. '"Jesus Christ, somebody'd shoot you for a coyote if you was by yourself. No you stay with me.'" Lennie is dependant on George because he looks after him in a world where people who are mentally disabled are treated as inferiors. Candy, the swamper, is old and crippled - he lost his hand in a machine in an accident at the ranch. Candy thinks that he is quite useless because of his disability, '"I ain't much good with on'y one had."' He is shown as a rather pathetic figure; he has no control over his life and is subservient to others. As the ranch is responsible for Candy's uselessness, he is only kept there due to his disability. Steinbeck included the character of Candy in his novel to show us what happens to elderly, disabled people who are no longer able to do their jobs. Through this, he shows us the discrimination they had to face in America in the 1930s. ...read more.

An' why? Because... because I got you to look after me, and you got me to look after you, that's why."' Crooks, Candy and Curley's wife are all lonely and isolated. Curley's wife is the only woman on the farm, and nobody takes her seriously because she is seen as a "tart" and "jailbait". Her attention seeking ways stem from her insecurity and loneliness. Though married, she is desperately unhappy and longs for someone to treat her like a human being, not a possession. Crooks is lonely because he is black. In the 1930s, many people had r****t attitudes and white people rarely mixed with blacks. As the only "coloured" person on the ranch, Crooks was ignored, he was an outcast and had no companions. Candy's only companion on the ranch was his dog, who was shot by Carlson. He was excluded from much of the bunkhouse activities because he was old and disabled. Curley's wife, Crooks and Candy all lack companionship. John Steinbeck wanted to highlight the fact that life in the 1930s was very lonely for the people who were deemed as social outcasts. Through this, he was protesting about the inequality of society. In conclusion, 'Of Mice and Men' is, to a large extent, a protest novel. John Steinbeck uses his novel to protest about the injustices that were around in America in the 1930s during the time of the Great Depression. He protests about discrimination against coloured people, the disabled and the elderly, which were very common in American society. Steinbeck also protests about the unattainable American dream, and how it gave many people false hope. Finally, Steinbeck protests about the corrupting power of loneliness and the negative effects it can have on a person. The novel should not be read as a historical text. 'Of Mice and Men' protests about the problems of American society during the 1930s Great Depression era. Through his novel, John Steinbeck wanted to put across his opinion and protest about the evils of society. ?? ?? ?? ?? Kasia Kalinowska ...read more.