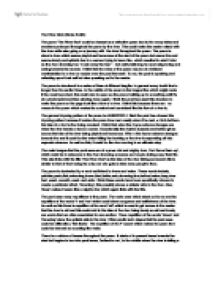 The River God (Stevie Smith) The poem 'The River God' could be classed as a reflective poem due to the many sides and emotions portrayed throughout the poem by the river. This could make the reader reflect with the river while also going on a journey with the river throughout the poem. The poem is about a river which seems playful and humorous at the start of the poem but nearer the end seems lonely and spiteful due to a woman trying to leave him, which resulted in what I infer as the river drowning her, 'wash away the fear' - but really believing he was being loving and caring towards the woman. I think that the voice of the poem may be of a fictional manifestation in a river or maybe even the poet themself. To me, the poet is speaking and reflecting upon their self but also speaking out to the reader. The poem is structured in a series of lines of different lengths. In general every fourth line is longer than the earlier three. ...read more.

The main images that the poet uses are of a powerful and mighty river, 'As I throw them up', which could be in reference to the river drowning someone and maybe taking away their life. This also links with the title 'The River God' as the idea of the river taking someone's life is similar to that of God being the only one who gets to take away people's lives. The poem is dominated by a word set linked to rivers and water. These words include; pebbles,pools,fish,swimming,drown,float,bathe,weir,drowning,flow,bethed,water,deep,river bed, weed, smooth, wash and wide. I think these words have been specifically chosen to create a particular effect, 'drowning', this possibly shows a sinister side to the river. Also, 'deep' makes it seem like a mighty river which again links with the title. The poet uses many repetitions in the poem. The main ones which stand out to me are the repetition of the words 'I' and 'me' which could show arrogance and selfishness of the river. As well as this there is repetition of the word 'old' which is used to get across to the reader that the river is ...read more.

These words are 'Go' and 'Now'. The use of caesura has the effect on the reader that the river is lonely and has been left before, and because the poem and the journey is coming to an end, it wants the reader to leave it then to stop anymore loss. When first reading the title 'The River God' a peaceful and desolate river comes to mind. This could be due to the fact that the word 'God' is associated with peacefulness while also being solitary and alone. After having read the poem, the river to me seems playful and loving while at the same time spiteful and humorous. The river could be seen as being playful and humorous, 'contrary to rules', because someone who breaks rules could be doing something fun and daring. The line 'contrary to rules' could also link with the title 'The River God' because of the idea of God setting out rules such as the ten commandments. The river seems playful and humorous also, 'Hi yih, yippity-yap, merrily I flow', because it seems like it is celebrating or cheering about something due to the non-standard English. The river also seems loving and caring, 'To be my beautiful dear', through the use of vocabulary. ...read more.