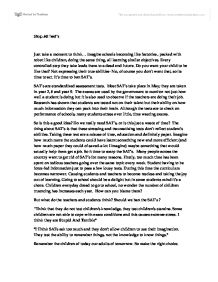 Stop All Test's Just take a moment to think... imagine schools becoming like factories , packed with robot like children, doing the same thing, all learning similar objectives. Every controlled step they take leads them to a dead end future. Do you want your child to be like that? Not expressing their true abilities- No, of course you don't want that, so its time to act. It's time to ban SAT's. SAT's are standardized assessment tests. Most SAT's take place in May; they are taken in year 2, 6 and year 9. ...read more.

So is this a good idea? Do we really need SAT's, or is this just a waste of time? The thing about SAT's is that these stressing and traumatizing tests don't reflect student's abilities. Taking these test are a misuse of time, education and definitely paper. Imagine how much more the students could have learnt something new and more efficient (and how much paper they could of saved-a lot I imagine) maybe something that would actually help them get a job. So it time to scarp the SAT's. ...read more.

Children everyday dread to go to school, no wonder the number of children truencing has increases each year. How can you blame them? But what do the teachers and students think? Should we ban the SAT's ? "Think that they do not test children's knowledge, they test children's stamina. Some children are not able to cope with exam conditions and this causes extreme stress. I think they are Stupid And Terrible" "I Think SATs ask too much and they don't allow children to use their imagination. They test the ability to remember things, not the knowledge to know things." Remember the children of today our adults of tomorrow. So make the right choice. ...read more.

This essay starts off well; it defines what it will be discussing in a very easy-to-relate to style. However, there are a few problems even in the introduction. Although the writer is obviously against SATs, he/she makes a few off-the-cuff ...

This essay starts off well; it defines what it will be discussing in a very easy-to-relate to style. However, there are a few problems even in the introduction. Although the writer is obviously against SATs, he/she makes a few off-the-cuff comments which are not really backed up. For example, that education leads to a "dead end future". Although the first paragraph is catchy, perhaps the second paragraph which explains SATs would be more suited to an introduction. Also, sometimes the language is too informal, for example "a few lousy tests". Also, in the final long paragraph, they list the reasons why SATs should be abolished and perhaps it would have been better to space the arguments out more evenly than cram them all into half a paragraph. However, overall, this essay is a lively, switched-on response to the question.

The level of analysis lets the style of writing down here. Although the piece is persuasive, it gives little backing for its points. For example, they question the use of year 2 SATs when it comes to employability - I agree, they don't aid employability, but then, in year 2, no one is looking to increase that! Basically, it ignores a good proportion of the argument i.e. the argument for SATs. Apart from a few basic arguments, such as anxiety and wasted-resources, there is no successful development of ideas or in fact, a conclusion.

The quality of writing is good. The candidate has used lots of different devices - I particularly like the rhetorical questions (but one must be careful not to over-do them!). Grammar and spelling is overall very good, although there are a few examples where full-stops have been used incorrectly, such as when they begin a sentence with "Causing" which I feel should have followed on from the last sentence. The use of quotations from teachers does make the piece interesting but seem slightly juvenile - perhaps they would be better off incorporated into the essay rather than at the end as it gives a feeling of rushing to finish the piece with little consideration of a conclusion. I am also not a fan of the pun used "Stupid And Terrible" - although original, it seems slightly trivial. The style is clear and the punctuation used, when correct, is effective at making the piece easy to understand.