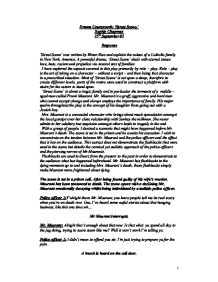 'Street Scene' was written by Elmer Rice and exploits the values of a Catholic family in New York, America. A powerful drama, 'Street Scene' deals with eternal issues: love, hate, racism and prejudice via several sets of families.

Drama Coursework: 'Street Scene.' Sophie Chapman 25th September 02 Response 'Street Scene' was written by Elmer Rice and exploits the values of a Catholic family in New York, America. A powerful drama, 'Street Scene' deals with eternal issues: love, hate, racism and prejudice via several sets of families. I have explored the aspects covered in this play primarily by role - play. Role - play is the art of taking on a character - without a script - and then being that character in a prescribed situation. Most of 'Street Scene' is set upon a stoop, therefore to create different levels; parts of the rostra were used to construct a platform with stairs for the actors to stand upon. 'Street Scene' is about a tragic family and in particular the torments of a middle - aged man called Frank Maurant. Mr. Maurant is a gruff, aggressive and hard man who cannot accept change and always employs the importance of family. His major qualm throughout the play is the concept of his daughter Rose going out with a Jewish boy. Mrs. Maurant is a concealed character who brings about much speculation amongst the local gossips over her close relationship with Sankey the milkman. She never admits to her adultery but suspicion amongst others leads to tragedy in the end. With a group of people, I devised a scenario that might have happened before Mr. Maurant's death. The scene is set in the prison and he awaits his execution. I wish to concentrate on the tension between Mr. Maurant and the police officers and the effect that it has on the audience. This extract does not demonstrate the flashbacks that were used in the scene but details the comical yet sadistic approach of the police officers and the piercing nerves of Mr.Maurants. Flashbacks are used to divert from the present to the past in order to demonstrate to the audience what has happened beforehand. ...read more.

The group decided to use pieces of the rostra to create levels. There were three platforms each at different heights. Sam sat on the bottom level and looked up to Mr. Maurant when he spoke to him, this reminded the audience that Mr. Maurant looks down to Sam and has a greater status. The second level was where Buchanan announced to the audience that Mrs. Maurant and Sankey were dead. This higher platform separates Buchanan from other characters highlighting him against others as he unleashes the tragic news. The third platform which was the highest, was where the actual murder took place. The third level being the highest point on the stage represents the climax of 'Street Scene' - the peak of action in the play. The speed at which the drama is performed has an effect upon the audience. There is a contrast at the beginning of the scene. Mr. Maurant has come home from work early and is going about his business as per usual. His approach at the start is average, but Sam (who is also on stage) is in a state of panic. He is fully aware that Sankey is upstairs with his mistress, Mr. Maurant's wife. He tries to act as a deterrent to move Mr. Maurant away from the house but Frank immediately looks up to see his wife behaving shockingly with another man. The speed of the scene is dramatically increased as Mr. Maurant becomes infuriates and tries to bustle past Sam to reach his cheating wife. The play reaches a climax when Maurant murders Sankey and Mrs. Maurant. He then threatens the community with his gun. The audience anticipate that he might strike again and there is a tense atmosphere amongst them. The tension does not settle because Mr. Maurant has not yet been arrested, it is only when Rose arrives that everyone, especially Sam, begins to act calm for her sake. ...read more.

In both pieces, the values of people are forgotten in favour of what stereotypes pursue. Mr. Maurant won't accept Sam because he dislikes Jewish people irrespective of their individual qualities and eventually Mickey cannot accept Edward because he feels different to him. Mickey's inability to cope with how different he is to Eddie is influenced by drugs yet again it has an ironic impact. Although he classes himself dissimilar to Eddie, they are similar in more ways than one for they are brothers. The audience realise this irony and become frustrated with both Mrs. Lyon's and Mrs. Johnston's inability to tell them the truth and soothe the mistake they made when they separated them at birth. Nevertheless without the silence kept between the mothers, the drama would not have drawn to such a peak that it did by the end of the show and 'Blood Brothers' would not have been as successful if there was a happy ending. Although the audience don't want Mickey and Edward to die, it is necessary that they do in order to simulate emotion and distinguish 'Blood Brothers' from other co - incidental drama where all turns well simply to calm the audience's feelings before leaving the theatre. I thoroughly enjoyed 'Blood Brothers.' I thought it was an excellent collaboration of intense drama and music. I thoroughly enjoy musicals but I often feel that musicals can have a weak storyline because there is more focus upon singing and dance. As much as I enjoy these aspects of theatre, I think that it is difficult to combine powerful drama and song and dance without belittling the dramatic tension. Nevertheless 'Blood Brothers' raised issues such as the nature of friendship, loyalty, family values, class, violence, betrayal as well as mental illness and depression yet with the inclusion of singing and dancing, it was still a fantastic piece of work. 'Blood Brothers' has encouraged my own goal to achieve similar standards to that cast to be able to emotionally move people. 2 1 ...read more.