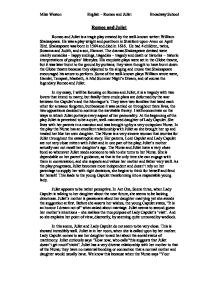 Study of Juliet's Charachter in Shakespeare's, Romeo and Juliet

Romeo and Juliet Romeo and Juliet is a tragic play created by the well-known writer: William Shakespeare. He was a play wright and poet born in Stratford-upon-Avon on April 23rd. Shakespeare was born in 1564 and died in 1616. He had 4 children, twins, Suzanna and Judith, and a son, Hamnet. The dramas Shakespeare devised were mainly comedies - happy endings, tragedies - tragedy and death or histories - historic interpretations of peoples' lifestyles. His exquisite plays were set in the Globe theatre, but it was later burnt to the ground by puritans; they were thought to have burnt down the Globe theatre because they objected to the singing and music that Shakespeare encouraged his actors to perform. Some of the well-known plays William wrote were, Hamlet, Tempest, Macbeth, A Mid Summer Night's Dream, and of course the legendary Romeo and Juliet. In my essay, I will be focusing on Romeo and Juliet, it is a tragedy with two lovers that intend to marry, but fatally there crude plans are deformed by the war between the Capulet's and the Montague's. They were two families that hated each other for a reason forgotten, but because it was carried on throughout there lives, the two oppositions decided to continue the inevitable frenzy. ...read more.

The way Juliet reacts to different situations changes repeatedly right through this scene. At this time and moment Juliet is demonstrating her respect and loyalty towards her mother. Lady Capulet is sceptical until Juliet says, "Your consent gives strength to make it fly" when asked about meeting Paris. Juliet does not make her own decisions and is dependant on her parents. I know this because she says she will only try and like him because her parents want her to. She doesn't argue with her mother, she immediately says yes, without hesitating, this shows that Juliet can be easily manipulated. Juliet can be seen to be both immature and open minded. When Juliet is questioned about getting married to a man she has never met, she is open to the suggestion. She says "I'll look to like, if looking liking move." In other words, she will look at him and see if she likes him and if she admires his appearance, she might give Paris a chance. She is amateur because she is going to judge Paris on his physical appearance. The way in which Juliet is open minded is because she says to her mother that she is willing to participate in the party and see if the bachelor lives up to the expectations that the Nurse described to her. ...read more.

Juliet now believes that she does not stand a chose of being with her soul mate. During the whole of Act One Scene three Juliet was loyal to her parentage, respectful and was very dependant on her parent. When she had to make decisions she turned to her parents to help her decide. She acted her age, thirteen. Her upbringing was by the Nurse so she was more close to her Nurse than her mother. In Act One Scene Five, we begin to see a more mature Juliet that made her own decisions. In this Scene Juliet had changed incredibly, she made her own choices and did not rely on her parents for anything. She is more demanding towards to the Nurse and others around her. In Act One Scene Three Juliet winces at the word marriage, now she is ready to have a relationship and even get married. I believe Juliet shows her real personality in Act One Scene Five because she is not relying on anyone anymore so she can express her views freely, whereas in Act One Scene three Juliet kept her self to her self and was depended on her Mother and Father. ?? ?? ?? ?? Mike Weston English - Romeo and Juliet Broadway School ...read more.