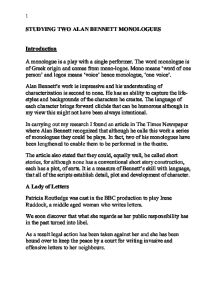 STUDYING TWO ALAN BENNETT MONOLOGUES Introduction A monologue is a play with a single performer. The word monologue is of Greek origin and comes from mono-logos. Mono means 'word of one person' and logos means 'voice' hence monologue, 'one voice'. Alan Bennett's work is impressive and his understanding of characterization is second to none. He has an ability to capture the life- styles and backgrounds of the characters he creates. The language of each character brings forward clich�s that can be humorous although in my view this might not have been always intentional. In carrying out my research I found an article in The Times Newspaper where Alan Bennett recognized that although he calls this work a series of monologues they could be plays. In fact, two of his monologues have been lengthened to enable them to be performed in the theatre. The article also stated that they could, equally well, be called short stories, for although none has a conventional short story construction, each has a plot, of sorts. It is a measure of Bennett's skill with language, that all of the scripts establish detail, plot and development of character. A Lady of Letters Patricia Routledge was cast in the BBC production to play Irene Ruddock, a middle aged woman who writes letters. We soon discover that what she regards as her public responsibility has in the past turned into libel. As a result legal action has been taken against her and she has been bound over to keep the peace by a court for writing invasive and offensive letters to her neighbours. Irene Ruddock is a lonely and sad woman. The death of her mother had a deep effect on her life and writing letters is in a way her escape route for loneliness and a lack of friends/family. Her letters include writing replies to circulars and even a letter to the Queen about dog droppings! ...read more.

It's just a holiday camp, do you wonder there's crime?" Then when she is sent to prison she enjoys it, this is ironic. The settings in both monologues are similar yet subtly different. For example they both start off in rooms that are old fashioned, but they are old fashioned in different ways because they are from different generations. Both the rooms have a focal point that is involved in the plot and the character concentrates on it. In 'A Lady of Letters' it is the window. Irene is near a window for almost the whole of the monologue this is because she is observing the social life of her community rather than taking part in it. In 'A Cream Cracker under the Sofa' the focal point is the fireplace. Doris injures herself while trying to dust it, she ends up next to it when she tries to go and make a cup of tea. Windows are also key in 'A Cream Cracker under the Sofa'. Through the windows Doris sees the little boy 'spending a penny' and the police officer coming to help her. There is a wide variety of connection between the two monologues. They both are about women who are trapped in some way. Irene is trapped by her anti-social letter writing and her lack of friends. You know that Irene has a lack of friends because she calls her pen "a real friend". Doris is trapped by her obsession with hygiene and her old fashioned views. You can tell that Doris is obsessed with hygiene because she talks about how she had an argument with her deceased husband Wilfred about having a tree in the garden she says: "'Given the choice Wilfred I'd rather have concrete.' He said concrete has no character.' I said, 'Never mind character, Wilfred, 'Where does hygiene come on the agenda?' With concrete you can feel easy in your mind" This extract shows just how obsessed with hygiene Doris is and how it rules her decisions and her life. ...read more.

Bennett makes the ending of a Lady of Letters dramatic because the audience does not find out immediately that she is in prison, they are kept in suspense because it is not known where she is or why she is here. Suspense is good in a play because it creates uncertainty in the audiences mind and makes them want to find out the outcome. The suspense builds up until Irene says: "Lucille says, 'you're funny you, Irene. You don't mind being in prison'. I said 'Prison!' I said 'Lucille this is the first taste of freedom I've had in years." There are a few indications earlier on that she is in prison: "I share a room with Bridget, who's from Glasgow. She's been a prostitute on and off and did away with her kiddy, accidentally, when she was drunk and upset." Drama is not the only reason that you don't find out for so long that it's a prison. Another reason is Irene herself, because she does not view prison as a form of imprisonment. She does not mention it because being in prison is not important to her. Her new friends have made her forget where she is and what they have done. For example when Irene talks about her friends murdering and prostitution in an off-hand way and she instead concentrates on the fact that: "Her mother was blind, but made beautiful pastry and she raised a family of nine in three rooms." Another example of this is Irene's friendship with the pyromaniac Shirley, "She shouldn't actually be in here in fact, she's not all there, but there's nowhere to put her. Apparently she sets fire to places...she's got a good heart." Alan Bennett makes 'A Cream Cracker under the Sofa' dramatic by raising your hopes about Doris's chances of being saved, but the audiences' hopes are dashed when she tells the police officer she's ok. Summary Monologues written and directed, as were both "A Cream Cracker under the Sofa'/'A Lady of Letters' provide audiences with thought-provoking drama. I enjoyed watching and studying in detail Alan Bennett's monologues. 1 ...read more.