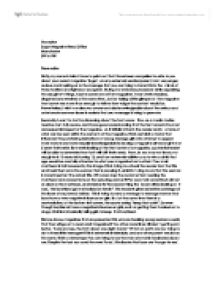 Sugar magazine letter. Dear Editor, Just by taking a little glimpse at the magazine front cover was more than enough to tell me how vulgar the content would be. Nevertheless, I wish to make you aware and also knowledgeable about the serious and unfortu

The editor Sugar Magazine Head Office Manchester SW1A 9XF Dear editor Firstly, my name is Leila. I have to point out that I have been compelled to write to you about your recent magazine 'Sugar'. As any extremely worried parent, I am very eager, curious and inquiring as to the message that you are trying to transmit into the minds of these faultless and righteous youngsters. During my everyday procedure while organizing the daughter's things, I came across one of her magazines. I was utterly shocked, disgusted and revolted at the same time. Just by taking a little glimpse at the magazine front cover was more than enough to tell me how vulgar the content would be. Nevertheless, I wish to make you aware and also knowledgeable about the serious and unfortunate common issues in society that your message is trying to promote. Secondly, I want to start by discussing about the front cover. Thus, as a media studies teacher, I am fully aware, and I have good understanding that the front cover is the most consequential aspect of the magazine. As it initially attracts the reader and is a taste of what can be seen within the contents of the magazine. This is certainly a factor that influences the purchasing behaviours of young teenage girls who attempt to appear more mature and more sexually knowledgeable by buying a magazine aimed at girls 4 or 5 years their senior. ...read more.

If my daughter gets into telling lies quite regularly, she might consider that telling lies is acceptable. God forbid that if she gets into a severe condition where she goes to court, and lies about something serious, she will have to cope with major fines or a shocking imprisonment. I'm sure you wouldn't want your daughter ending up in these kinds of situations. Surely you must have an idea of the horrific things you are sending out to teenagers. By pressuring teens to tell fibs, fusses and big problems will come about soon. As you stated, that your magazine is best for teenagers, they may come in search of guidance from it. By reading magazines that proposes that lying is acceptable, teenagers will start to believe it because it came from a 'trustworthy and believable source'. Do you honestly think that backstabbing is acceptable? This can also lead to people committing suicide. Due to you teaching this kind of behaviour, I think that you should take consideration and smarten up the contents of the magazine. Would you want your daughter to be reading this kind of material? Or following this misleading advice? Would you want your daughter to be losing friends just for stupid reasons? Would you want your daughter wasting her savings on slutty clothes? I'm sure you feel the same way as I do, or any other parent. Also I need to now bring up another shocking issue. ...read more.

I also wanted to mention just how many problems in society your magazine is supporting. For instance, we know that the number of girls in the UK with bulimia and anorexia are rising, so instead of lowering their self-esteem even more, you could write stimulating articles to make them feel confident and positive about their looks. Also I think you should carry out surveys to find out what teenagers really want, and demolish those unacquainted stereotypes. Or maybe, you could put in an age limit on magazines which are not suitable for children; hence youths will have to think twice before purchasing the magazine. You could also put a parental advisory tag. This can also represent that the contents are not at all suitable for youngsters. You should really be searching for a way to eliminate the problems and issues instead of producing them. We, as reliable and mature adults need to work side-by-side with the media to guarantee that a high level of corruption does not get in touch with our children. I know that I am not the only concerned carer who has written to you after finding a copy of a rather offensive, filthy and crude magazine hidden between our youngster's textbooks. Finally, I also think you should stop stereotyping women and teens. Thank you for taking your time in reading my concerns, I am eagerly to see the changes that you have made in your magazine, and to be targeted at the right audience. I would be very obliged to hear a response. Yours faithfully Leila Ali ...read more.