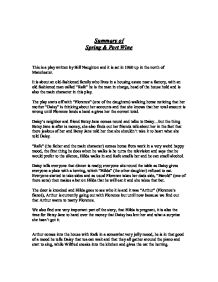 Summary of Spring & Port Wine This is a play written by Bill Naughton and it is set in 1960 up in the north of Manchester. It is about an old-fashioned family who lives in a housing estate near a factory, with an old fashioned man called "Rafe" he is the man in charge, head of the house hold and is also the main character in this play. The play starts off with "Florence" (one of the daughters) walking home noticing that her mother "Daisy" is thinking about her accounts and that she knows that her total amount is wrong until Florence lends a hand a gives her the correct total. Daisy's neighbor and friend Betsy Jane comes round and talks to Daisy...but the thing Betsy Jane is after is money, she also finds out her friends talk about her in the fact that there jealous of her and Betsy Jane told her that she shouldn't take it to heart what she told Daisy. ...read more.

The door is knocked and Hilda goes to see who it is and it was "Arthur" (Florence's fianc�), Arthur is currently going out with Florence but until now because we find out that Arthur wants to marry Florence. We also find one very important part of the story, that Hilda is pregnant, it is also the time for Betsy Jane to hand over the money that Daisy has lent her and what a surprise she hasn't got it. Arthur comes into the house with Rafe in a somewhat very jolly mood, he is in that good of a mood he tells Daisy that tea can wait and that they all gather around the piano and start to sing, while Wilfred sneaks into the kitchen and gives the cat the herring. ...read more.

Jane picks the lock with a hair pin in order to get some money for Hilda, Daisy however even though she puts the safe back she pawns an overcoat of Rafe's which has never bin worn. Wilfred and Harold have then both decided to move out and get a place off there own after how much Rafe has pushed them, Rafe then finds out all of his kids have decided to leave, Florence getting married, Hilda moving away starting a family and Wilfred and Harold wanting a place of there own. When they was all in the living room Rafe suddenly went all nice again and said things that made all four of his kids that made them suddenly changed their mind so they all decided to stay and it was like Rafe planned it out in his head using reverse psychology to make them stay. ...read more.