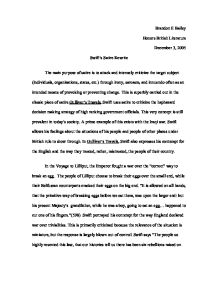 Brandon E Bailey Honors British Literature December 3, 2005 Swift's Satire Rewrite The main purpose of satire is to attack and intensely criticize the target subject (individuals, organizations, states, etc.) through irony, sarcasm, and innuendo often as an intended means of provoking or preventing change. This is superbly carried out in the classic piece of satire Gulliver's Travels, Swift uses satire to criticize the haphazard decision making strategy of high ranking government officials. This very concept is still prevalent in today's society. A prime example of this exists with the Iraqi war. Swift allows his feelings about the situations of his people and people of other places under British rule to show through. In Gulliver's Travels, Swift also expresses his contempt for the English and the way they treated, rather, mistreated, the people of their country. In the Voyage to Lilliput, the Emperor fought a war over the "correct" way to break an egg. The people of Lilliput choose to break their eggs over the small end, while their Belfuscan counterparts cracked their eggs on the big end. ...read more.

They are trained in this art from their youth, and are not always of noble birth, or liberal education. When a great office is vacant either by death or disgrace 5 or 6 of those candidates petition the Emperor to entertain his majesty with a dance on the rope and whoever jumps the highest without falling, succeeds in office"(595). The Lilliputian's applicants must have dexterity and the ability to dance well on the tight rope without falling. The qualification of holding that position is irrelevant to carrying out the job correctly. Swift is satirizing the foolishness of the whole process and trying to illustrate England this way. England and many other kingdoms during Swift's time were very corrupt and had to please the king in order to get a position in the kingdom. Although the miscellaneous behavior of the Lilliputians is humorous, it is very thought provoking to the people of England. If the Lilliputians were thinking logically they would have some type of grounds for governmental office consideration. For example, the nominee's could have to be educated to a certain degree or just maybe have some background in the area of interest. ...read more.

The poor decision to begin the Iraqi war has cost the United States over 150 billion dollars, money that could have been spent on education or many of the other needs of our country. Our President initiated war on primarily unsound grounds, which has yielded us nothing but lost money and lives. The American government is set up in such a way that, high ranking officials can easily select whomever they want to fill positions regardless of their qualifications. Though the system is not as shallow as that of the Lilliputian system, it does not make it correct. In the end it comes down to who you know and what you can do for the candidate. The horrendous decisions made by our "flagship Americans" often prove to cause detriments, which could be easily avoided by making more sound decisions. I believe that the fault within this problem lie in both social intuitions and human nature. Social institutions convince us that are decisions are correct and human nature tells us to help ourselves at the expense of others. Society has caught on to these wrongdoings, but as illustrated in the movie the government can easily subtle our minds. Or maybe we just like things the way they are. ...read more.