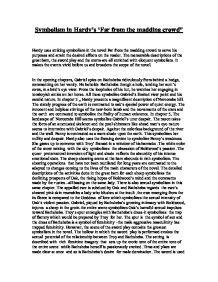 symbolism in Hardy's 'Far from the madding crowd'

Symbolism in Hardy's 'Far from the madding crowd" Hardy uses striking symbolism in the novel Far from the madding crowd to serve his purposes and attain the desired effects on the reader. The memorable descriptions of the great barn, the sword play and the storm-are all enriched with eloquent symbolism. It makes the events vivid before us and broadens the scope of the novel. In the opening chapters, Gabriel spies on Bathsheba ridiculously from behind a hedge, commenting on her vanity. He beholds Bathsheba though a hole, tending her aunt's cows, in a bird's eye view. From the loopholes of his hut, he watches her engaging in tomboyish antics on her horse. All these symbolize Gabriel's limited view point and his candid nature. In chapter 2 ,, Hardy presents a magnificent description of Norcombe hill. The stately progress of the earth is contrasted to oak's special power of quiet energy. The innocent and helpless stirrings of the new-born lamb and the movements of the stars and the earth are contrasted to symbolize the frailty of human existence. ...read more.

There is also sexual symbolism in this same chapter. The appalled ewe is subdued by Oak and Bathsheba regards the ewe's sheared pink skin resembles a lady who blushes at the insult .the ewe emerging from the its fleece is compared to the Goddess of love which symbolizes the sexual intensity of Oak's violent passion. Gabriel, piqued by Bathsheba's growing intimacy with Boldwood, injures a sheep in the groin-the entire scene symbolizes Oak's harmful sexual impulses toward Bathsheba. Troy's spur entangles with Bathsheba's dress-it symbolizes the trap of flattery which would be prepared by Troy for her. The spur is the symbol of sex and the dress of Bathsheba is a symbol of femininity -the male aggressive masculinity has trapped femininity. However, the scene of the sword play contains the greatest symbolism in the novel. The hollow in which the sword play is performed evokes the sexual potential of the relationship between Troy and Bathsheba. The setting is described with rich feminine imagery that sets up the erotic tone of the entire tone of the entire scene while Bathsheba herself is passionately excited .Time and place are made clear at ...read more.

And when the storm comes, it is described with extended imagery ,the mailed army of lightning springs like a serpent , with the shout of a fiend . Hardy uses such imagery to convey the forces of nature hostile to human beings .The scene of chapter 44 is significant as it indicates Bathsheba's return to the same hollow where sword-play was performed by Troy. The aforesaid hollow is now turned into a malignant swamp. The swamp is the symbol of utter despair into which Bathsheba has fallen . The symbolism goes far deeper as Bathsheba had seen the place before when she was captivated by Troy at the sword play. At that time , the ferns were soft , feathery arms caressing her feet but now they are withering fast and the hollow is a nursery of pestilences .The two different states of the hollow reflects the two opposing states of mind and suggests the outcome of marriage with Troy .Now she has understood the implications of her marriage and she herself and Nature are fused as the leaves rush away in the breeze. This symbolizes Nature as a stark force and implies that the parallel between Nature and human mood should not be pursued by man. ...read more.

This essay is lacking direct references to the text and those that are included are not shown in quotation marks, which is essential. There is a clear understanding of the presence of symbolism, but not always a clear explanation of what it shows about the plot or characters.