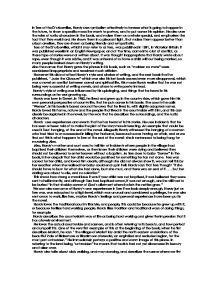 Symbolism in Tess of the D'urbervilles

In Tess of the D'urbervilles, Hardy uses symbolism effectively to foresee what is going to happen in the future, to show a specific mood he wants to portray, and to put across his opinion. He also uses the roles of rustic characters in the book, and makes them as a whole special, and emphasises the fact that they work hard. He shows them in a pleasant light, that makes them appear better than urban dwellers, they are shown as being friendly and sympathetic. Tess of the D'urbervilles, which I may refer to as Tess, was published in 1891, in Victorian Britain. It was published weekly in an English Newspaper, and at the time, came into a lot of conflict, as these type of stories were not written about. It was thought inappropriate that Hardy wrote about rape, even though it was subtle, and it was unheard of to have a child without being married, so many people looked down on Hardy's writing. Also the names that Hardy gave the phases in his book, such as "maiden no more" were considered inappropriate and received much criticism. However this did not effect Hardy's style and choice of writing, and the next book that he published, " Jude the Obscure" which was also his last book caused even more disapproval, which was a novel on conflict between carnal and spiritual life, this made Hardy realise that he was not being very successful at writing novels, and chose to write poetry instead. Hardy's style of writing was influenced by his upbringing, and things that he heard in his surroundings as he was growing up. Hardy was born in Dorset, in 1980, he lived and grew up in the country side, which gave him his own personal perspective of country life, that he puts across in his books. The county he calls "Wessex", in his books is based around the area that he lived in, with slightly adapted names. ...read more.

Saying, "a little more than persuading had to do' the coming o't I reckon" referring to the rape, " there were they that heard a sobbing one night last year in the chase." The workers were very sympathetic, and did not make Tess feel bad in anyway. Another occasion where Hardy makes rustic people seem friendly is when Izzie tells Angel how much Tess loves him, even though she loves him as well herself. The rustic characters in Marlott, were also understanding and respected Tess' wishes. When Tess was walking back from the May Dance, with her friends and companions, and met her father, who it appeared was making a fool of himself by saying he had a family vault. Tess stood up for her father, which not very many people would have done, because she was probably exceedingly embarrassed by his behaviour, thinking that he was drunk, as no doubt her friends would be thinking. When the girls started laughing at Tess' father, Tess stood up for him saying " I won't walk another inch with you if you say any jokes about him." Hardy then says "perceiving that they had really pained her they said no more." This proves that although rustic characters were sometimes a little harsh, as people can be, they were respectful, and overall good people. The rustic characters in the novel can also be used to contrast others, and show there bad qualities when we compare them to each other, Hardy does this effectively, and if we compare them to for example the Clare brothers, we can see that the rustic characters are more relaxed, and are up for having a good time. They are friendly type people. When Angel asked his brothers to join him in dancing with the may dancers they declined. Saying " no-no; nonsense!" "Dancing in public with a troop of country hoydens- suppose we should be seen!" ...read more.

Finally the book ends in winter, when Tess has killed Alec, and is now going to be hung. This is a sad ending, in what is also a sad season. As well as seasons having a significant effect on what is to happen, we can also tell what is going to happen in the future by colours that Hardy uses. Hardy uses colours as a representation, to show something for what it really is. Most colours have symbolic reference and can show something when looked into more deeply. The colour white is symbolic, because it represents purity and cleanliness. Tess is often seen wearing white clothes, and is described as being "this white shape" which is almost like describing her to an angel. Green is used as a representation of good things, such as grass, and hills and the countryside, and everything that Hardy likes that is natural. If the land and outlook ahead was green then it would be a good life. Hardy described Tess' old life, before she moved to Trantridge as being good and green. "behind the green valley of her birth" Grey symbolises no hope and looking into a bad future. As hardy referred to Tess' life ahead as being grey. " Before a grey country of which she knew nothing." Which is how Hardy makes it easy to tell by colour and the seasons what will happen in the future. Another colour that is also very important and is used a lot is red, red is a danger sign, warning of what is to come. It is referred to when Alec feeds Tess strawberries, by the red of the strawberries, and placing flowers on her. This should have started alarm bells sounding in Tess' mind about the danger that Alec was, but they didn't, as Tess was oblivious as to what was going on. The colour red was also used to describe Alec D'urberville's house, as a "crimson brick lodge" which was forewarning Tess that something bad would happen here. This is how colour can be used effectively to show what is to come. ...read more.