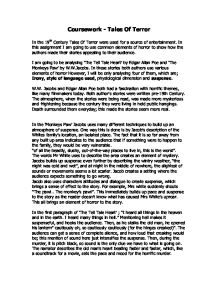 Coursework - Tales Of Terror In the 19th Century Tales Of Terror were used for a source of entertainment. In this assignment I am going to use common elements of horror to show how the authors made their stories appealing to their audience. I am going to be analysing 'The Tell Tale Heart' by Edgar Allan Poe and 'The Monkeys Paw' by W.W.Jacobs. In these stories both authors use various elements of horror However, I will be only analysing four of them, which are; Irony, style of language used, physiological dimension and suspense. W.W. Jacobs and Edgar Allan Poe both had a fascination with horrific themes, like many filmmakers today. Both author's stories were written pre-19th Century. The atmosphere, when the stories were being read, was made more mysterious and frightening because the century they were living in held public hangings. Death surrounded them everyday; this made the stories seem more real. In the 'Monkeys Paw' Jacobs uses many different techniques to build up an atmosphere of suspense. One way this is done is by Jacob's description of the Whites family's location, an isolated place. The fact that it is so far away from any built up area indicates to the audience that if something were to happen to the family, they would be very vulnerable. "of all the beastly, slushy, out-of-the-way places to live in, this is the worst". The words Mr White uses to describe the area creates an element of mystery. ...read more.

It creates suspense because it shows us how much Mrs White is worried and that she really feels that something terrible had happened to her son. The writer also uses short sentences in his story that create tension in the reader: 'What is it?', 'Is he hurt' . These short sentences are a result of Mrs White's anxiety and worry about her son. We as readers also feel anxious because of these short sentences that speed up the stories pace. We also expect that something bad will happen and the characters are the one's with their anxious action's that give us this feeling. Another technique in language is the deliberate choice of words that create an atmosphere in the reader's mind: "...throwing pulsating shadows on the ceiling and walls,". This sentence describe the motions that Mr White's candle shown. The writer created suspense by creating a very clear image in the reader's mind of how scary these shadows are and of how dark it is in there. He also uses personification by giving the shadows a pulse and this brings elements of horror into the story because we feel as if these shadows are going to attack Mr White. In the 'The Tell Tale Heart' The story begins in the middle of an event. This is obvious because the story begins with a conversation that's already begun. ...read more.

and Mrs. White lose their son Herbert in the fulfilment of the wish. The two hundred pounds is the amount of payment due on the life insurance policy for Herbert, who is killed in an accident at work. In another dramatic ironic twist, the lonely parents wish for their son back, but he returns a mangled, hideous creature; so, Mr. White must wish him dead to spare Herbert and his wife the agony of his living a tortured life. In 'The Tell-Tale Heart' The most common form of literary irony is situational irony however, Poe uses different types of irony, Verbal and dramatic. An example of Verbal is: he empathizes the old man, while hatching plan to kill him. An example of dramatic is: the old man thinks a robber is attacking him but it is really the narrator. The narrator shows, calmly at first how he became insane, even though he is actually trying to show to us that he is not insane, and finishes his story in a state of anxiety. The narrator is obsessed with the old man's eye which he fears, but it is the sound of the old man's heart that does the narrator in. There is another irony here: is it the old man's heart he is hearing or is it the narrator's own anxious heart beating strongly from guilt that he is hearing and mistaking for the old man's heart? And remember, earlier he states that he has an over acute sense of hearing. ?? ?? ?? ?? ...read more.