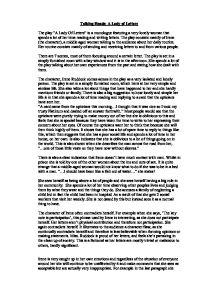 Talking heads - A lady of letters.

Talking Heads: A Lady of Letters The play "A Lady Of Letters" is a monologue featuring a very lonely woman that spends a lot of her time reading and writing letters. The play consists mainly of Irene (the character), a middle aged woman talking to the audience about her daily routine. Her routine consists mainly of sending and receiving letters to and from various people. There are 7 scenes, most of them focusing around a certain letter. The play is set in a simply furnished room with a bay window and it is in the afternoon. She spends a lot of the play talking about her own experiences from the past and stating how she dealt with them. The character, Irene Ruddock comes across in the play as a very isolated and lonely person. The play is set in a simply furnished room, which hints at her very simple and aimless life. ...read more.

This is also shown when she describes the man across the road from her, "...one of those little vests on they have now without sleeves." There is also a clear indication that Irene doesn't have much contact with men. Whilst in prison she is told by one of the other women about the ins and outs of s*x. It is quite strange that a middle-aged woman would not know what to do if she was to be in a bed with a man. "...I should have been like a fish out of water..." she states! She sees herself as being above a lot of people and she sees herself having a big role in her community. She spends a lot of her time observing other peoples lives and judging them by what they wear and the things they do. She accuses a family of neglecting a child but in fact the child had been in hospital. ...read more.

For example in the last paragraph she talks about how Bridget is dreaming about the kiddy she killed, Irene says at the end of it, "...I'm so happy." This shows how although she cares for Bridget she is untouched by her sadness and screams. The way the play write brings the character of Irene across in the play is clever because it brings out a lot of emotions in the audience. They feel sorry for Irene because she is so isolated and lonely but they feel angry because of her obliviousness to the things that they can see so clearly. They also feel a sense of hate for Irene when she is being so cheeky to the police officers and when she finds out about the child being ill, she seems not to even care. It is hard to relate to the character of Irene because today there are not many people that live a life style similar to hers. People tend to mix with people more and spend more time socialising and participating in things, where as Irene tends to keep herself to herself and stay in her own house. ...read more.