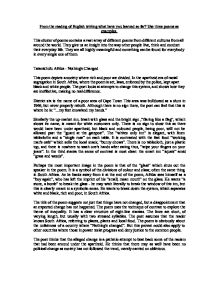 From the reading of English writing what have you learned so far? Use three poems as examples. This cluster of poems contains a vast array of different poems from different cultures from all around the world. They give us an insight into the way other people live, think and conduct their everyday life. They are all highly meaningful and something can be found for everybody in every single one of them. Tatamkhulu Afrika - Nothing's Changed This poem depicts a society where rich and poor are divided. In the apartheid era of racial segregation in South Africa, where the poem is set, laws, enforced by the police, kept apart black and white people. The poet looks at attempts to change this system, and shows how they are ineffective, making no real difference. District six is the name of a poor area of Cape Town This area was bulldozed as a slum in 1966, but never properly rebuilt. Although there is no sign there, the poet can feel that this is where he is: "...my feet know/and my hands." Similarly the up-market inn, brash with glass and the bright sign ,"flaring like a flag", which shows its name, is meant for white customers only. ...read more.

The poet thinks that the alleged change is a pathetic attempt to beat back some of the racism that had been around under the apartheid. He thinks that there may as well have been no political change as society has not followed the trend, merely carried on oblivious. From this poem I have learned that the apartheid was a huge and radical infringement of basic human rights upon the black population of South Africa. I have learned that a small proportion of the white community tried to do much about the terrible regime in which they lived. Perhaps the most horrific thing that I have come across, is the fact that even after the apartheid was lifted, the same hatreds remained and it was as if nothing had changes, as was suggested in this poem. Island man- Grace Nichols The subtitle really explains this simple poem - it tells of a man from the Caribbean, who lives in London but always thinks of his home. The poem opens with daybreak, as the island man seems to hear the sound of surf - and perhaps to imagine he sees it, since we are told the colour. This is followed by simple images of the fishermen putting their boats out, the sun climbing in the sky and the emerald green island. ...read more.

We have a clear sense of the writer's world - in her culture water is valued, as life depends upon the supply. This is a culture in which belief in a kindly god is seen as essential. She suggests a vague and general religious belief, or superstition. The poem ends with a picture of children; naked and screaming. The sense of their beauty "highlights polished to perfection" is balanced by the idea of their fragility, as the "blessing sings over their small bones". From this poem I have learned that in other cultures basic resources, which we in the west take for granted are desperately needed. They rely solely on their gods to deliver the much-needed substances. If they do not receive these blessings then they will perish. From this cluster of poems I have learned so much about other people and other cultures, how they live, thrive and survive, I have shared the joys and miseries of men from South Africa to children of the Indian Sub-Continent. I have seen that to write great English you don't necessarily have to have to be English, to have ever lived in England, or indeed to ever have been associated with the country, you simply need inspiration. ...read more.