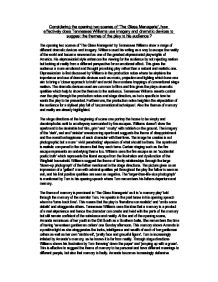 tConsidering the opening two scenes of 'The Glass Menagerie', how effectively does Tennessee Williams use imagery and dramatic devices to suggest the themes of the play to his audience?

Considering the opening two scenes of 'The Glass Menagerie', how effectively does Tennessee Williams use imagery and dramatic devices to suggest the themes of the play to his audience? The opening two scenes of 'The Glass Menagerie' by Tennessee Williams show a range of different dramatic devices and imagery. Williams used his writing as a way to escape the reality of the world and became renowned as one of the greatest expressionist playwrights of America. His expressionist style enhances the viewing for the audience by not rejecting realism but looking at reality from a different perspective for an emotional effect. This gives the audience a more emotional and thought provoking play rather than a natural and realistic one. Expressionism is first discussed by Williams in the production notes where he explains the importance and use of dramatic devices such as music, projection and lighting which have one aim to bring a 'closer approach to truth' and avoid the mundane trappings of conventional stage realism. The dramatic devices used are common to films and this gives the plays cinematic qualities which help to show the themes to the audience. Tennessee Williams asserts control over the play through the production notes and stage direction, as he is specific in how he wants the play to be presented. Furthermore, the production notes heighten the expectation of the audience for a stylised play full of 'unconventional techniques'. Also the themes of memory and reality are already highlighted. The stage directions at the beginning of scene one portray the house to be simply and claustrophobic next to an alleyway surrounded by fire escapes. ...read more.

Williams first suggest this theme to the audience when Amanda talks of the numerous gentleman callers she had to pick from but then picking their ' father'. Williams shows that disappointment can lie not only with you but also with other people, as Amanda is disappointed that the life she dreamt of in Blue Mountain is not reality - she is left with a disgruntled son and a 'crippled' daughter who is painfully shy with no qualifications and no gentleman callers. Through imagery within the stage directions and speech, Williams portrays Amanda's disappointment and anguish in her children effectively in scene two when confronting Laura with dropping out of her typing class. He begins with Amanda having 'a look that is grim and hopeless and a little absurd', while walking through the door with a disapproving shake of the head. All these physical movements are done slowly which exaggerates her feelings and prolongs her speech adding to the disappointment. Williams also uses the stage direction to again control the situation by commanding that Amanda 'count ten' or 'count five' numerously in the scene to add to the dramatic tension and also the slight comedy of Amanda. As well as acting hysterically towards Laura, Williams suggests the theme of reputation as Amanda is dressed in her best clothes. However, these clothes are 'cheap' and 'imitation' fur and velvet which she considers to be her 'full dress outfit'. The theme of reputation is essential to Amanda but not so much Laura or Tom. ...read more.

The effectiveness is to highlight the important aspects of the dialogue and project pictures from the past. However, in a recent production, director Rupert Goold chose like many others before him to not use the suggested screen device and still the performance was both emotional and memorable. To conclude, Tennessee Williams uses imagery and dramatic devices effectively in the opening 2 scenes to initially suggest the theme throughout the play. The development of the plot shows that Amanda, Tom, Jim and Laura come close to their dreams and ambitions but only Tom accomplishes his dream. Finally when Tom escapes physically from the apartment and the warehouse he realises his dream but, physiologically he is still trapped due to his memory of Laura. However, as was suggest in the opening scenes, only Laura seems to come close to resolution of her dream with Jim and once more find comfort with her glass menagerie. Throughout the play the characters are also tempted by illusion when the reality is too distressing. Williams suggests that the idea of dream and even the 'American dream' is an illusion to help escape from the real problems. Williams shows that holding onto memories can be negative as it is hard to move on and live in the present if you always want to go back. He shows that escape is not possible and in the end no character made a clean break. Tennessee Williams could have been sending a message through the play suggesting that you cannot escape and hide reality. The only escape in life is to solve your problems and not to avoid them. ...read more.