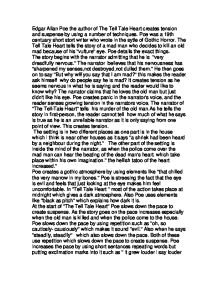 tension and suspense of the tell tale heart

Edgar Allan Poe the author of The Tell Tale Heart creates tension and suspense by using a number of techniques. Poe was a 19th centuary short stort writer who wrote in the sytle of Gothic Horror. The Tell Tale Heart tells the story of a mad man who decides to kill an old mad because of his "vulture" eye. Poe details the exact things. The story begins with the narrator admitting that he is "very dreadfully nervous." The narrator believes that his nervousness has "sharpened my senses,not destroyed,not dulled them." He then goes on to say "But why will you say that I am mad?" this makes the reader ask himself why do people say he is mad? It creates tension as he seems nervous in what he is saying and the reader would like to know why? The narrator claims that he loves the old man but just didn't like his eye. ...read more.

Poe slows down the pace by using repetition such as "oh, so cautiosly- causiously" which makes it sound "evil." Also when he says "steadily, steadily" which also slows down the pace. Both of these use repetition which slows down the pace to create suspense. Poe increases the pace by using short sentances repeating words but putting exclimation marks into it such as " it grew louder i say louder every moment!" Also "and now-again-hark! louder!louder!louder!LOUDER!" This repeats but uses explination marks to show the tone of voice (shouting). In "The Tell Tale Heart" as the narrator is telling the story of how "wisely" he kills the old man the narator uses a smug attitude. Such as " i knew what the old man felt, and i pitied him although i chuckled at heart." This makes the reader feel that the mad man is actually mad as he is laughing at the old mans fear. ...read more.

Poe uses lots of words like this. These words have an effect on the reader as it is emotive language. Poe describes the eye in two differnt ways during the story these are "a vulture eye" and "a evil eye." This reffurs back to ancient times when people used to think that having an eye with a film over it means that you give off bad spirits. The narrator has an obsession over the eye and drives him to madness. As it comes to the end of the story the suspension is at its most. there is lots of short sentances and so the pace is fast. There is so much going on there is the beating of the heart, the mad man stressing and the police talking. It all builds up and then he confesses and says "villans! disemble no more! I admit the deed!- tear up the planks!-here, here- it is the beating of the hideous heart!" ...read more.