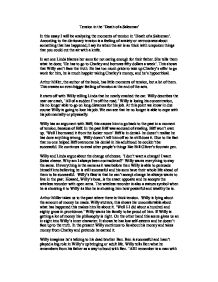 tension in the death of a salesman

Tension in the 'Death of a Salesman' In this essay I will be analysing the moments of tension in 'Death of a Salesman'. According to the dictionary tension is a feeling of anxiety or nervousness about something that has happened; I say its when the air is so thick with unspoken things that you could cut the air with a knife. In act one Linda blames her sons for not caring enough for their father. She tells them what he does; 'He has to go to Charley and borrows fifty dollars a week'. This shows that w***y can't face the truth. He has too much pride to take up Charley's offer to go work for him, he is much happier taking Charley's money, and he's hypocritical. Arthur Miller, the author of the book, has little moments of tension, but a lot of them. This creates an even bigger feeling of tension at the end of the acts. It starts off with w***y telling Linda that he nearly crashed the car. w***y describes the near car crash, 'All of a sudden I'm off the road.' w***y is losing his concentration, his no longer able to go on long distances for his job. At this point we know in due course w***y is going to lose his job. We can see that he no longer is able to cope with his job mentally or physically. w***y has an argument with Biff; this causes him to go back to the past in a moment of tension, because of Biff. ...read more.

Tension starts to grow again straight away for the audience because they are aware of the flaw unlike w***y and his family. Like I said although some tension is relieved for the family, the audience can see right though the plan, they can see is all relays on chance and they see that the family needs a little success to keep them all together. This proves they are all living in the past, and they won't admit the truth. They will cling on to all the hope they can. Miller starts act two with a big moment of tension. This is very different compared to the way Miller started act one. We start act one with a little moment of tension. w***y is fired from his job by Howard, who w***y named; this gave w***y a false sense of safety. In the business world how much money you make is the only thing that keeps you employed. Howard explains to w***y that he can no longer work for him. 'I don't want you to represent us anymore.' Howard is trying to let w***y down gentle; he still has a little bit of respect for w***y. Bill Oliver doesn't remember Biff. Biff realises that the business idea was a silly idea and that it wasn't realistic. He feels humiliated and realises he was just a shipping clerk. As a way to get back at Oliver, Biff steals Oliver's fountain pen. Biff steals as a way to punish the person who used to possess the stolen object. ...read more.

w***y and Biff can never resolve their disagreements. Biff tries to tell w***y about the tube and w***y's admit at suicide but w***y denials everything. When the past gets stressful, w***y goes back to the present and if the present gets stressful then w***y goes back to the past. He can now just go back and forth between times in his mind. w***y can't stand tension. This shows that w***y's character is weak. He's not strong enough to combat the harsh tensions. w***y drives off in his car and crashes, he dies. 'There is the sound of a car starting and moving away at full speed.' This scene could have been interrupted as an accident or suicide. It could have been accidental because there was screaming in w***y's head and he wanted to get away from it and in his confusion he crashed the car. On the other hand, it could be that he wanted to give the insurance to Biff. Plus he does talk about a suicide plan to his dead brother Ben in his imagination. Overall the play has lots of moments of tension in it. Miller starts off with little moments of tension and works his way to the big moments of tension. He removes all the tension at the start of act two just so he can build it up again. This story links to the Great Depression which was going on at the time of the play. Miller doesn't like the idea of the American Dream because he knows it destroys a lot of lives and is very hard to live up to. (Write about the American dream and refer to the play as a tragedy) ...read more.