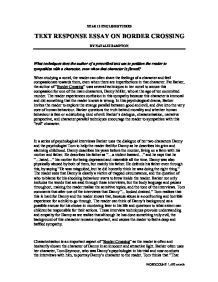 YEAR 12 ENGLISH STUDIES TEXT RESPONSE ESSAY ON BORDER CROSSING BY NATALIE BAMPTON What techniques does the author of a prescribed text use to position the reader to sympathise with a character, even when that character is flawed? When studying a novel, the reader can often share the feelings of a character and feel compassionate towards them, even when there are imperfections in that character. Pat Barker, the author of "Border Crossing" uses several techniques in her novel to arouse this compassion for one of the main characters, Danny Miller, who at the age of ten committed murder. The reader experiences confusion in this sympathy because this character is immoral and did something that the reader knows is wrong. In this psychological drama, Barker invites the reader to explore the strange parallel between good and evil, and dive into the very core of human behaviour. Barker questions the truth behind morality and whether human behaviour is fate or a disturbing kind of evil. Barker's dialogue, characterisation, narrative perspective, and character parallel techniques encourage the reader to sympathise with this "evil" character. In a series of psychological interviews Barker uses the dialogue of her two characters Danny and the psychologist Tom to help the reader feel for Danny as he describes his grim and alarming childhood. Danny describes his years before the murder, living on a farm with his mother and father. ...read more.

This characterisation certainly shows to the reader that Danny doesn't seem evil, but a victim of a cruel twist of fate and therefore the reader is positioned to feel sympathy towards this character. Barker's use of narrative perspective gives the reader a greater grasp of Danny's captivating character, and persuades the reader feel even more drawn to him. Danny and Tom's interviews are very complex and intense, and although the novel is written in third person, the majority of it is from Tom's perspective. Danny is therefore as unfathomable to Tom as he is to the reader. The reader is never sure if Danny is telling the truth, as his motives for even meeting with Tom are ambiguous. It was Tom who convinced the jury that Danny should be tried in an adult court and Danny even admits to Tom that he felt "betrayed". Because Danny is such an exceptional character, Tom almost becomes the "bad guy" and the blame for at least Danny going to jail is put on him. Danny's lawyer in the case comments to Tom saying "They [the jury] believed him...they didn't believe he'd done it. I didn't believe it, and I knew he had." Tom completely changed what everyone thought of Danny and feels in some way responsible, although he rather wouldn't, for Danny landing in jail. Now, Tom is torn between this guilt-fuelled empathy for Danny and "the clinician's splinter of ice in the heart." ...read more.

Tom and Danny were both frightened, but Barker suggests it was fate which chose who was evil and who wasn't. This parallel between the protagonist and the antagonist make the antagonist seem not so bad. Barker persuades the reader to feel sorry for Danny, because the murder he committed was just a cruel twist of fate, according to her. She draws this parallel to show the reader that fate plays a huge role in whether a person is wicked, or has just done an evil deed. Both Tom and Danny's actions were immoral, but Danny is shown as the "evil" one throughout the novel. This provokes more sympathy for Danny, as Barker suggests that he is only a victim of a horrible fate, and that he is not an immoral person. Pat Barker in "Border Crossing" uses her dialogue, characterisation, narrative perspective and character parallel techniques to encourage the reader to feel sympathy towards the character Danny, even after committing murder. The novel does not allow the reader to understand him but enables the reader to see him more clearly, and to empathize with him. Barker truly questions the "evil" in which Danny has done, and whether it was up to fate or other influences to decide this, or whether Danny is a wicked person. Barker certainly generates a lot of sympathy for Danny using her techniques, even after he has done wrong. The reader feels sorry for Danny, because, as suggested throughout the novel, Danny is a victim of a cruel twist of fate, and is not in-fact evil. ?? ?? ?? ?? WORDCOUNT: 1,492 words ...read more.