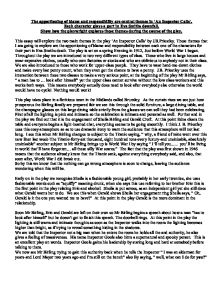 The apportioning of blame and responsibility are central themes in 'An Inspector Calls'. Each character plays a part in Eva Smiths downfall. Show how the playwright explores these themes during the course of the play.

The apportioning of blame and responsibility are central themes in 'An Inspector Calls'. Each character plays a part in Eva Smiths downfall. Show how the playwright explores these themes during the course of the play. This essay will explore the two main themes in the play 'An Inspector Calls' by J.B.Priestley. These themes that I am going to explore are the apportioning of blame and responsibility between each one of the characters for their part in Eva Smiths death. The play is set on a spring Evening in 1912, Just before World War 1 began. Throughout the play we are introduced to two very different types of class. Those who live in large houses and wear expensive clothes, usually who own factories or stocks and who are oblivious to anybody not in their class. We are also introduced to those who work for upper-class people. They have to wear hand-me-down clothes and make every last penny count, when they even get the chance to have a penny. J.B. Priestley uses the interaction between these two classes to make a very serious point, at the beginning of the play Mr Birling says, " a man has to ... look after himself" yet the upper class cannot survive without the low class workers and this works both ways. This means everybody actually does need to look after everybody else otherwise the world would have no cycle! Nothing would work! This play takes place in a fictitious town in the Midlands called Brumley. As the curtain rises we see just how prosperous the Birling family are prepared fair we see this through the solid furniture, a large dining table, and the champagne glasses on this large dining table strictly from the glasses we can sell they had been celebrating. First of all the lighting is pink and intimate so the celebration is intimate and personal as well. Further and in the play we find out that it is the engagement of Sheila Birling and Gerald Croft. ...read more.

The inspector now turns to Gerald and asks him what relationship he had with Daisy; Gerald immediately puts up a defence saying 'Where did you get the Idea that I did know her?' But the now more mature, sensible Sheila puts a stop to this defence straight away saying 'Its no use Gerald, your wasting time'. Gerald Gives in and explains how he knew her. It was when he was out one night in the palace bar, somewhere he shouldn't have been anyway since it was mainly for drunkards and whores, and he caught sight of a pretty girl who didn't seem to fit in. This pretty girl was Daisy Renton. Gerald saw That she was having trouble with a man and so being the gentleman that he is he saved her from him and after realizing she had nowhere to stay and no food to eat he put her up in a temporary apartment and gave her money to eat, she became his mistress, but as time went on he fell for her looks and had an affair with Daisy. In Gerald told Daisy the affair was over, she left the apartment that Gerald let her stay in as she couldn't stay there much longer anyway as it was only temporary, Gerald didn't see her after that. Gerald was wrong to string her along the way he did, deep down he would have known that the relationship wouldn't last long, why would it he had the daughter of a rich, respected, self made business man. Gerald is not totally in the wrong, it wasn't right having an affair but he did give Daisy a place to stay and made sure she had something to eat. He got caught up being the 'wonderful fairy prince' and did not think realistically of the consequences of both him and Daisy. Sheila sees that he didn't intentionally set out to hurt her feelings and can also see he was being honest she says to him 'that's probably the best thing you've said all night. ...read more.

Sheila, who after this whole experience has grown up and became a mature young girl, changes from what she was like at the beginning. We could see that It was Gerald who was in charge but now Sheila is as she replies to her father and Gerald 'no, not yet. It's too soon. I must think'. Sheila has learnt from the experience and cannot believe how na�ve her parents are that they cannot see the lesson that she herself has learnt. Eric too is similar to Sheila and is ashamed of what he is done. Mr and Mrs Birling forgave Gerald from having an affair on their own daughter but when it came to forgiving their son of stealing money to try and help a young girl in need. Mr Birling says 'you'll stay here long enough to give me an account of that money you stole-yes, and pay it back too' Mrs Birling still blames Eric for everything saying 'I'm absolutely ashamed of you' I think the person, who holds most of the blame, is the blissfully ignorant Mrs Birling. Yes I agree that she had a right to hold the fact that Eva lied straight away when she was trying to get help but It wasn't just Eva that needed help it was the unborn child inside her. Also the way Mrs Birling openly told everybody that she abused her power to deny help to Eva. If Mrs Birling wasn't so ignorant to what was going on with her own son she may have been able to help Eric work through his drinking problems, maybe then he wouldn't have been so forceful with Eva to sleep with her that night. Mrs Birling remained obnoxious throughout the play and became worse when she found out that Inspector Goole was a fake. Mrs Birling is a heartless, selfish, ignorant, snob and no matter what happens she will never accept any blame for anything and so will not change, that is why I feel she is mostly to blame for the death of Eva Smith/Daisy Renton and her unborn child. ...read more.

This is a very detailed and well-structured response. The writer is extremely engaged throughout and offers many personal responses which are supported with evidence from the play including quotations. It is clear that the writer is very enthusiastic about the play. Reference is made in detail to the play's staging elements which enhances the response. At times the writer offers too much description rather than comment which could be reduced through careful editing. However, the points which the descriptions accompany should be retained, as they are appropriate and relevant to the essay's theme. The writer should also avoid too many colloquial (informal) phrases and words and adopt a more formal register. The essay needs to be written in the present tense throughout. There is a need to proof-read in order to amend errors in spelling, punctuation and grammar.