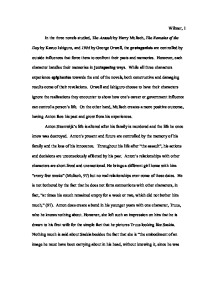 The Assault by Harry Mulisch, The Remains of the Day by Kazuo Ishiguro, and 1984 by George Orwell - discuss how the protagonists are controlled by outside influences that force them to confront their pasts and memories.

Wilmer, 1 In the three novels studied, The Assault by Harry Mulisch, The Remains of the Day by Kazuo Ishiguro, and 1984 by George Orwell, the protagonists are controlled by outside influences that force them to confront their pasts and memories. However, each character handles their memories in juxtaposing ways. While all three characters experience epiphanies towards the end of the novels, both constructive and damaging results come of their revelations. Orwell and Ishiguro choose to have their characters ignore the realizations they encounter to show how one's career or government influence can control a person's life. On the other hand, Mulisch creates a more positive outcome, having Anton face his past and grow from his experiences. Anton Steenwijk's life is altered after his family is murdered and the life he once knew was destroyed. Anton's present and future are controlled by the memory of his family and the loss of his innocence. Throughout his life after "the assault", his actions and decisions are unconsciously affected by his past. Anton's relationships with other characters are short-lived and unemotional. He brings a different girl home with him "every few weeks" (Mulisch, 97) but no real relationships ever come of these dates. He is not bothered by the fact that he does not form connections with other characters, in fact, "at times his couch remained empty for a week or two, which did not bother him much," (97). Anton does create a bond in his younger years with one character, Truus, who he knows nothing about. ...read more.

Just like he did not want to learn the truth about the actions taken against his family, "he has joined it against his will, this demonstration, and there's an ironical look in his eye, as if he finds the situation amusing," (185). Now that Anton can finally accept the events that changed his life, "all is forgotten in the end," (185) and his past no longer haunts him. Similarly, Stevens is a man who hides from his true feelings and engrosses himself in his career. Stevens' profession controls him and because his emotional needs Wilmer, 4 have never been fulfilled, he throws himself into his career and lives through his memories. On his journey to meet Miss Kenton, which he attributes to needing her help because of understaffing at Darlington Hall, he reminisces about his past instead of thinking about the present or the future. He recalls fighting with Miss Kenton, whom he secretly loves, over professional matters and even leaving his father on his deathbed so that he could cater to his employer. He justifies his actions by assuring himself that his father "would have wished me to carry on just now. To do otherwise, I feel, would be to let him down," (Ishiguro, 106). Stevens is an extremely professional man and never admits to his shortcomings. His close attention to detail, such as the Giffen and Co. silver polish, and preciseness proves that Stevens does not let anything, not even his personal feelings, get in the way of his work. ...read more.

It's a message from a hundred years ago, if one knew how to read it," (145). This paperweight however also symbolizes Winston's downfall when it is "smashed to pieces on the hearthstone," (223) by the Thought Police as they arrest him. Winston then thought "how small it always was," (223) just like his hopes of escaping the wrath of Big Brother always were. Winston is ruined because of his refusal to accept the Party's lies about history. Winston continues for a short period of time to deny Big Brother's ideals and question to Party's motives but he finally gives up when faced with his biggest fear, rats. After his experience in Room 101, he whole-heartedly accepts Big Brother and the lies that are fed to the citizens of Oceania every day. He still has memories of his mother but he "pushed the picture out of his mind. It was a false memory," (296). 1984 ends with "he loved Big Brother," (297). Like Ishiguro, Orwell creates a pessimistic ending. Winston's epiphany is distinguished from Anton's because, instead of realizing his faults, Winston reverts to the behavior he once despised. Mulisch is juxtaposed from Ishiguro and Orwell by the fact that The Assault gives the hope that, given the chance; one can change and find happiness. The shift in tone from stoicism to thoughtfulness is distinguished from the continuous tones of Wilmer, 7 reminiscence and nostalgia in The Remains of the Day and 1984. Anton is released from the oppression he faces from his denial of his past while Stevens remains under the control of his profession and Winston continues to be restricted by the Party. ...read more.