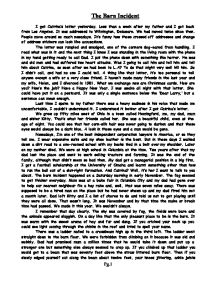 The Barn Incident I got Catrina's letter yesterday. Less than a week after my father and I got back from Los Angeles. It was addressed to Wilmington, Delaware. We had moved twice since then. People move around so much nowadays. It's funny how those crossed off addresses and change of address stickers can look like accusations. The letter was rumpled and smudged, one of the corners dog-eared from handling. I read what was in it and the next thing I knew I was standing in the living room with the phone in my hand getting ready to call Dad. I put the phone down with something like horror. He was and old man and had suffered two heart attacks. Was I going to call him and tell him and tell him about Catrina, so soon after we had been to L.A? To do that might very well kill him. So I didn't call, and had no one I could tell. A thing like that letter, it's too personal to tell anyone except a wife or a very close friend. I haven't made many friends in the last year and my wife, Helen, and I divorced in 1981. ...read more.

We stood at the foot of the ladder. Kitty's eyes more sparkling than ever. "Dare ya," I said. "Darers go first," replied Kitty promptly. "Girls go before boys," I retorted. "Not if it's dangerous." Casting her eyes down demurely as if everyone didn't know that she was the biggest tomboy in Hemingford. But, that's how she was about it, she would go but not first. "Ok," I said, "Here I go." I was ten that year and thin as a twig. Kitty was only eight. The ladder had always held us before and we thought it would always hold us. Which is a philosophy that gets men and nations in trouble time after time. As usual I had a vision of what would happen if the ladder gave up the ghost. I kept going until I could firmly grasp the beam and hoist myself up. Kitty's small oval like face turned up to watch me. I called down to her, "Hi down there." My voice floating down to her on moats of chaff. "Hi up there," she loudly replied. I stood up. Swaying back and forward a little. ...read more.

There was an awkward silence. "You didn't know?" I said in shock. "I didn't know what you were doing." "You must have." I blurted out! "I was right under you for crife sake." " I didn't dare look down. I was too frightened. I had my eyes shut the whole time." I was thunderstruck. "You didn't know? You didn't know what I was doing?" She shook her head. "And when I told you to let go you just did it?" She nodded. "How could you do that?" She stared at me through those deep blue eyes. "I knew you were doing something to fix it. You're my big brother." "Oh Kitty..." But that never got finished either. I put my hands over my face. She sat up, took them away and then kissed me on the cheek. "But I knew you were down there. I'm sleepy. I'll see ya tomorrow Larry." My father replaced the ladder but we never dived again. It was the end but somehow not the end. Somehow it never ended until nine days ago when Kitty dived from the roof of an insurance building. I carry it in my wallet as if it's my work. The headline reads 'Girl Swan-Dives To Her Death'. Now, that's all that matters, other than facts that don't mean anything. Pg.1 ...read more.