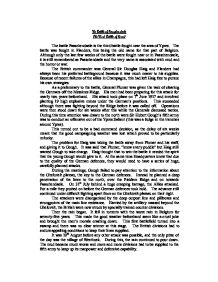 The Battle of Passchendaele (The Third Battle of Ypres)

The Battle of Passchendaele (The Third Battle of Ypres) The battle Passchendaele is the third battle fought near the area of Ypres. The battle was fought in Flanders, this being the old name for that part of Belgium. Although only the last few weeks of the battle were fought near or in Passchendaele, it is still remembered as Passchendaele and the very name is associated with mud and the horror or war. The British commander was General Sir Douglas Haig and Flanders had always been his preferred battleground because it was much nearer to his supplies. Because of recent failures of the allies in Champagne, this had left Haig free to pursue his own strategies. As a preliminary to the battle, General Plumer was given the task of clearing the Germans off the Messines Ridge. His men had been preparing for this attack for nearly two years beforehand. His attack took place on 7th June 1917 and involved planting 19 high explosive mines under the German's positions. This succeeded although there was fighting beyond the Ridge before it was called off. Operations were then stood down for six weeks after this while the Generals discussed tactics. During this time attention was drawn to the north were Sir Hubert Gough's fifth army was to conduct an offensive out of the Ypres Salient (this was a bulge in the trenches around Ypres). ...read more.

The Germans would also be allowed to carry out their counter attacks but the British would be dug in and waiting for them defended by heavy artillery fire. The battle, apart from a few small setbacks, was a huge victory for the British and it brought morale way up after beating what seemed to be an over confident enemy. On 26th September Plumer delivered the second of his main attacks against the enemy lines. This day was surprising because the weather had become hot and dry, not wet and muddy as it was for most of the rest of the campaign. Many more of the German's important defences were taken from them and their counter attacks were completely smashed. This also raised men's morale to a very high level. The British advance was now moving so quickly that their men occupying the German outposts could not be relieved or replaced. This was why Haig wanted to have the battle in Flanders because he could now draw on his supplies to keep the advance going. The Germans were amazed at this development. Their own defence tactics had been used against them. The German commander, Lunendorff could only order a more determined defence of the main line and a closing up of the counter divisions. They launched a series of counter attacks at the end of September, which were foiled by the British artillery and machine gun fire. ...read more.

What if the first few battles had been fought under Plumer rather than Gough? This could quite easily have made the battle a decisive victory for the Allies. Instead, neither side won and both sides considered this as a defeat. The Germans probably suffered the worst out of this campaign. The British Divisions destroyed 88 of the German's divisions, which would have served through the rest of France. All of their defences could not stop Plumer gouging huge chunks out of them. The Germans were also never able to find the weakness in the French defences and this was a huge plus for the Allies. As a result, there are huge war memorials set in and around Passchendaele, each one holding thousands of memorials to the soldiers who died. Passchendaele is often thought of as the worst battle of the First World War due to the appalling conditions that the soldiers and the animals had to face. Many died of the weather conditions as well as being killed by the enemy. Although Haig had learnt a lot since the start of the war but he still showed disrespect for the soldiers life's. He still sent men into the battle with not nearly enough equipment for a hope of surviving. He also didn't take into account the mud that covered all of the battlefield and in the trenches. I think that this was probably the worst battle of the First World War due the conditions the soldiers had to face and how they were allowed to face these dangers. ...read more.