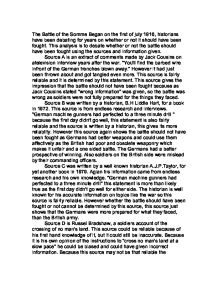 The battle of the Somme - This analysis is to debate whether or not the battle should have been fought using the sources and information given.

The Battle of the Somme Began on the first of july 1916, historians have been debating for years on whether or not it should have been fought. This analysis is to debate whether or not the battle should have been fought using the sources and information given. Source A is an extract of comments made by Jack Cousins on atelevision interview years after the war. "You'll find the barbed wire infront of the German trenches blown away." However it had just been thrown about and got tangled even more. This source is fairly reliable and it is determined by this statement. This source gives the impression that the battle should not have been fought because as Jack Cousins stated "wrong information" was given, so the battle was wrong as soldiers were not fully prepared for the things they faced. Source B was written by a historian, B.H Liddle Hart, for a book in 1972. This source is from endless research and interviews. "German machine gunners had perfected to a three minute drill " because the first day didn't go well, this statement is also fairly reliable and the source is written by a historian, this gives its more reliablity. However this source again shows the battle should not have been fought as Germans had better weapons and could use them affectively as the British had poor and obsolete weaponry which makes it unfair and a one sided battle. ...read more.

In this quote he is really optimistic about it all because the war is still going on he has to protect the nation from the truth. This source is reliable because it has come from Lloyd George but it is not reliable because the war is still going on and he has to le to stop uproar throughout the nation. So this source states that everthing is good but this is not true but his statement agrees that the battle should have been fought because everything is going well and it is helping to gain a better prospective of winning the war. Source H is also a another statement made by Lloyd George but, after his fall from Prime Minister. A statement from his book published 1933-39. This source states how bad it actually was and Lloyd George's opinion of it all had changed, he talks about " it is claimed that the Battle of the Somme destroyed the old German army by killing off its best officers and men." " It killed off far more of our best." This statement is very reliable as he does not have to lie anymore because the war is over and he is not Prime Minister anymore so he can say what he likes. So this source agrees that the battle should not have been fought as it went really bad for the British and many good men were killed. ...read more.

" Entente worked their way further into German lines" this statment is in comparison to all three objectives, because if the Entente worked their way into German lines it was wearing down the enemy so more men would have to be sent there, thus relieving pressure on Verdun and stopping the further transfer of troops. This Source is reliable as it came from a German. This source also agrees that the battle should have been fought because again it played a great part in the eventual defeat of Germany. Source N are the figures of men lost on the first day and the total losses by the end of the battle. 1st July 1916, "19,420 British killed, " by the end of the battle in total of all sides " 1,070,000 dead." The battle only lasted for 5 months and so many lives were lost in such a short space of time. This source is reliable as they are official figures, this source agrees that the battle shoud not have been fought as so many men lost their lives in the short amount of time of 5 months. In conclusion from analysing thoroughly the sources and information provided it would seem that the morgority of the sources would agree that the battle should not have been fought for various reasons. However a final descision will never be made as there are so many points to be analysed and discussed. No-one will ever come to a conclusion because everyone has different opinions. ...read more.