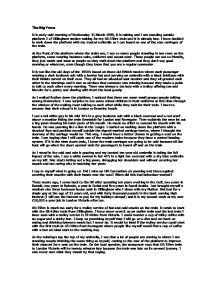 The Big Yawn It is early cold morning of Wednesday 31 March 1999, it is raining and I am standing outside platform 2 of Gillingham station waiting for my 06:35hrs train and it is already late. I have decided to walk down the platform with my trusted umbrella so I can board on one of the rear carriages of the train. At the front of the platform where the stairs are, I see so many people standing in two rows on the platform, some wearing business suits, uniforms and casual wear. These people are not so friendly, they just watch and stare at people as they walk down the platform and they don't say good morning or whatever, even though they know that you are a regular commuter. It is not like the old days of the 1950's based on those old British movies where each passenger wearing a dark business suit with a bowler hat and carrying an umbrella with a black briefcase with their initials carved on their case. They all had an allocated seat number and they all greeted each other in the mornings and it was so obvious that someone was missing because they made a point to talk to each other every morning. There was always a tea lady with a trolley offering tea and biscuits for a penny and sharing with them the local gossip. As I walked further down the platform, I noticed that there are some small groups people talking among themselves. ...read more.

On the loud speaker, the announcer says that 06:35hrs train to London Victoria will be twenty minutes late because the train was late on its onward journey. I was never sure what they meant by that saying. The train finally comes round the bend and slowly drives through platform 2 of Gillingham Station. The train is a slam door one with poor seats and cold carriages. I decided to sit in first class because I have a better chance in getting a seat. As I opened the door to the first class carriage, I see a white guy with grey hair in a blue business suit reading the FT, he was sitting on the rear side and his seat was facing the rear of the train. We did not say good morning to each other, however, I noticed the strange look he gave me as if he was judging me with his brown eyes in a way to say that I don't have a first class ticket and I should not be sitting there. Anyway, I sat down on the seat near the door facing the front of the train and ignoring his strange look leaving the grey hair man to carried on reading his paper (yesterday's FT). The train moves out to Chatham station as the train moves out I look through the window and see many men and women with a few ethnic minorities standing on their own or in a company of white people on the platform waiting for the London Canon Street train which usually arrives five minutes after the London Victoria train. ...read more.

Yesterday I remembered seeing some young white kids, primary school age, at the Wimpy on the High Street in Gillingham and they too let out a mighty yawn without covering their mouths and their parents who were nearby did not say anything. In fact the man who I assumed that the man was their daddy started to yawn and each time his yawns were bigger. The big yawn, he exposed his big mouth for everyone to see. The man had a pot belly with short dark brown hair and looked like he had not shaved for weeks. Also as I was walking to the cash machine of Abbey on the High Street, I saw this black man in his early 20's without warning opened his mouth letting out a big yawn without covering his mouth and holding hands with a Chinese woman who I assumed was his girlfriend. A few second later the Chinese woman did the same and after yawning, she started kissing her man as they walk down the High Street towards Gillingham train station. I would like to know when this became OK not to cover your mouth when you yawn? Who made it popular not to cover your mouth or move your head away when you yawn? I am still old fashion when I yawn, I will always cover my mouth with my hands. Somewhere I read some many years back that one of the international rules of behaviour was that it was consider bad manners to yawn without covering your mouth. Times have certainly changed since then. ...read more.