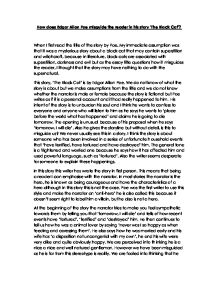 How does Edgar Allan Poe misguide the reader in his story 'The Black Cat'? When I first read the title of the story by Poe, My immediate assumption was that it was a mysterious story about a black cat that may contain superstition and witchcraft, because in literature, black cats are associated with superstition, darkness and evil but as the essay title questions how it misguides the reader, I thought that the story may have nothing to do with the supernatural. This story, 'The Black Cat' is by Edgar Allan Poe. We do not know of what the story is about but we make assumptions from the title and we do not know whether the narrator is male or female because the story is fictional but Poe writes as if it is a personal account and it had really happened to him. His intent of the story is to unburden his soul and I think he wants to confess to everyone and anyone who will listen to him as he says he wants to 'place before the world what has happened' and claims he is going to die tomorrow. ...read more.

We are perceived into thinking he is a nice a nice and well natured gentleman. However we have been misguided as he is far from this stereotype is reality. We are fooled into thinking that he was an animal lover who would never hurt a soul. He tries to get our sympathy because he is consumed with guilt at the fact he sickly mistreated and killed a cat and ill-treated and went on to try and kill his second cat with an axe, but instead he savagely and 'accidentally' killed his wife, he says how he 'buried the axe in her brain'. We have been betrayed completely by the narrator. Another way that the reader is misguided is by the unusual structure. In most stories these usually contains only one major climax but in 'The Black Cat' there is a number of major climax's but the events that happen in the climax's gets worse as the story goes on, making us forget the last climax that happened and we become 'immune'. ...read more.

In this story, it is two cats that are used as doubles to highlight the fact of the narrators split personality. Also another thing that suggests the narrator has a split personallity is the gouging of his cats eye. In english litrature, the gouging of an a eye is interpretted as the person who done it, wanting to be self-castrated. As this story was wrote in the pre 20th century when homosexuallity was illegal, one theory is that the narrator may have in denile of being h********l,. This relates back to the self-castration, is it possible he wanted to become a woman? So that it was legal to have relationships with males. And by killing his wife with an axe demonstrates his inability to be with a woman. In conclusion I felt the purpose in the narrator writing his account of what had happaned was to divert the blame of all the horrible things he had done, off of himself. My personal reaction tp this story was rather excited and anxious as to what would happen next, after each climax, but I also felt quite disturbed as the story made me be in the mind of a murderer. Vanessa Bird ...read more.